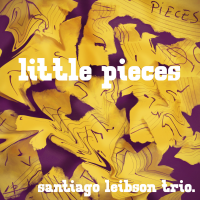 Recorded on May 2019 at Luis Bacque Recording Studio, with assistance of Thom Beemer; mix and mastered by Luis Bacque.

Santiago Leibson is a Brooklyn based, Argentinian born jazz pianist and composer. His music is situated in the frontier of jazz, improvised music, classical and contemporary music. As a bandleader, he has released four trio records: Amon (2014), Pendular (2015), Out of Orden (2016) and Episodes (2018). Little Pieces is his last work and the second release of this iteration of Santiago Leibson trio (with Matt Pavolka on bass and Mark Ferber on drums), prompt to be released on May 20th by Chant Records. The band features two of the most remarkable rhythm section players on the New York jazz scene known for their unique connection in a variety of contexts. Both Matt’s and Mark’s sound and development of the material was crucial for this music. The inspiration for this music derives from Schoenberg’s Six Little Pieces for Piano (especially No.2) and the idea to combine self-contained “atomic” worlds with improvisation in a jazz trio format, thus intertwining these two great traditions. All the music was conceived as short compositions (9-bars) with its own logic and expression which is then developed through collective improvisation. Each of the tracks features unique textures and provokes different modes of interplay among the band-members.

All About Jazz musician pages are maintained by musicians, publicists and trusted members like you. Interested? Tell us why you would like to improve the Little Pieces musician page.