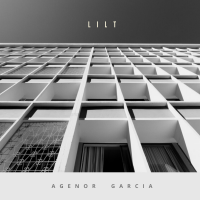 LILT (music wander) was recorded at GDR studios, produced by Glen Kolotkin. ​"Lilt is a strong testament to Agenor Garcia's completely spontaneous playing. Although in his early days he used some standards as a vehicle to express his musicality, Agenor Garcia is now known for his often avant-garde original compositions. His intense atonal approach, generally emphasizes dense sets of sounds played with a remarkable technique." -Glen Kolotkin (Grammy Awarded, plus 20 platinum Albums record engineer). LILT was recorded at GDR studios, and some tracks were shot during the recording sections, by the filmmaker Renato Lombardi. The tracks "Lilt" and "Shiver", were shot as an uncut sequence, giving to the audience an upscale artistic experience. ​The beautiful album cover was designed by the artist Andrey Hermuche, inspired in the building where the artist lived for a while.

All About Jazz musician pages are maintained by musicians, publicists and trusted members like you. Interested? Tell us why you would like to improve the Lilt musician page.