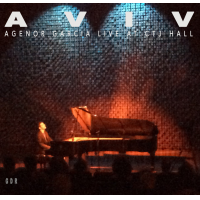 AVIV Agenor Garcia Live At CTJ Hall Produced by GLEN KOLOTKIN (record producer fort Glenn Gould, Miles Davis, Barbra Streisand among others). March-10-1017 GDR - All Rights Reserved "AVIV" The basic meaning of the word Aviv is the stage in the growth of grain when the seeds have reached full size and are filling with starch, but have not dried yet. During the plague of hail (Exodus 9:31), the barley was said to be Aviv and the flax giv`ol. The month in the Hebrew calendar when the barley has reached or passed this stage (Exodus 13:4; 23:15) is called Aviv, or the "month of the Aviv". "Aviv" accordingly also means spring, one of the four seasons. Thus the major modern Israeli city of Tel Aviv means "Spring Hill".

All About Jazz musician pages are maintained by musicians, publicists and trusted members like you. Interested? Tell us why you would like to improve the AVIV musician page.