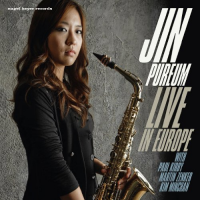 The album was recorded at Kunstlerwerkstatt Pfaffenhofenin Germany during the live performance on July 27, 2012, along with the band members she was on tour with, Paul Kirby on piano, Martin Zenkeron bass, and MinchanKim on drums. The album includes nine tunes of jazz standards and originals (track 5 & 6) by Paul Kirby. Pureum Jin is the first Korean jazz musician to release an album through major jazz label in Europe. Through her stunning debut, which astonished the audience in Europe about Pureum and Korean Jazz, initiated the Jazz Festival ‘Jazz Korea’.

All About Jazz musician pages are maintained by musicians, publicists and trusted members like you. Interested? Tell us why you would like to improve the Jin Pureum Live in Europe musician page.