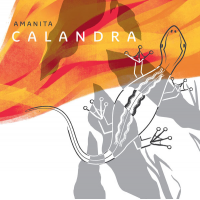 Imagine the hottest hours of a summer's day, around noon or shortly after. This is the time when the "calandra" envelopes the village. People dare not to venture outside and if they do, they seek shelter from the sun under the shadow of an olive or lemon tree, waiting for a breeze to lift the heat. In this very moment when all is still and quiet, a lizard comes out from his hiding place, free at last to wander undisturbed.

All About Jazz musician pages are maintained by musicians, publicists and trusted members like you. Interested? Tell us why you would like to improve the Calandra musician page.