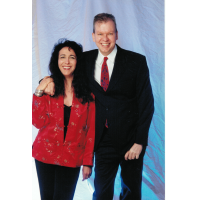 You'd be So Nice To Come Home To, Misty, I Didn't Know What Time It Was, Alone Together, When Lights Are Low, Alright Ok You Win, Ringo Oiwake, I Let A Song Go Out Of My Heart, Out Of This World.

Phillip Strange and Cathy Segal-Garcia have toured together since 1990, throughout Japan and Europe. Especially while in Japan, the requests were to perform mostly jazz standards, and to challenge themselves over the years, they took the arrangements to surprising modern treatments. Both serious musicians, they also held similar humor too, both of which are very obvious in this recording. They recorded during a week in July 1998, after a month long tour in Japan. Clarke Rigsby, Tempest Studio in Tempe, AZ…is known as an audiophile recording engineer…the quality of this recording is stunning!

Help improve the Alone Together page

All About Jazz musician pages are maintained by musicians, publicists and trusted members like you. Interested? Tell us why you would like to improve the Alone Together musician page.