By DOUG COLLETTE
April 2, 2021
Sign in to view read count 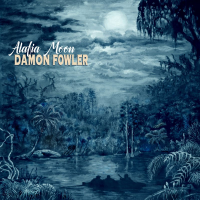 The title of Damon Fowler's Alafia Moon is enough to pique the curiosity, but the stylish and mysterious cover art makes listening to the album irresistible. And it's wholly worth it too, finding out in the process of absorbing the man's eighth solo album that the graphics are the creative output of Flournoy Holmes, artist for of the gate-fold design of the Allman Brothers Band's Eat A Peach (Capricorn, 1972).

Such facts combine with the prevalent blues-rock style on the LP to reaffirm how deep are Tampa, Floridian Fowler's Southern influences. For instance, his guitar effortlessly complements the harp of T. C. Carr as the two bounce atop the modified shuffle of "Leave It Alone." Damon's stints as guitarist with the Dickey Betts Band and the late Butch Trucks' Freight Train ensemble make sense on "Wanda" too: the slight stutter to the tempo sounds like it comes naturally to all involved, most importantly the elastic rhythm section of bassist Chuck Riley and drummer Justin Headley.

The speedy collective gait never abates during Fowler's snappy solo there or during the jump blues of "I've Been Low" for that matter. As this near sixty-minute album progresses, it becomes increasingly tempting to anticipate this artist's spotlights a bit much, but that's only because his playing invariably adds the finishing touches to the arrangements as well as the performances. And while Damon Fowler's slightly-reedy voice may not be as distinctive as his versatile fretwork, when he intones on the soulful title track, his passion is unmistakable because it is so honestly rendered.

As are the backup vocals from Betty Fox. This woman's own ardent singing hearkens to the church as directly as Mike Kach's organ playing on that cut. Elsewhere on these eleven tracks, almost all originals including "Hip To Your Trip" (co-written with Jim Suhler), Fowler manages to depict how he plays slide as fluently as he straight picks and he does so without calling attention to himself. For instance, hear the interlocking parts on "Make The Best Of Your Time," on which its author speaks to our constricted era without overstating his message or his intent.

Likewise, the name of this Damon Fowler album becomes a contemporary cultural reference, that, as with the multiple overdubs of acoustic instruments on "The Guitar" (co-authored by illustrious Texas native Guy Clark and his long-time creative liaison Verlon Thompson) speaks volumes. 'Alafia' means 'peace' and, used as a name for both men and women in Nigeria, becomes emblematic of the poised and varied skills this artist brings to bear as he plays and co-produces with engineer George Harris (who's also worked with Cheap Trick and Rick Derringer).

That shared, diverse artistry mirrors the technical expertise the latter brought to bear on this LP. The fundamental clarity of sound in the recording merges with the mastering of Alex McCullough, so that the width of the stereo spectrum is virtually as deep as the bottom of the dynamic range. Unfortunately, the bothersome sound of Josh Nelms' bottles and background noise combines with the eight-minute plus duration of "The Umbrella," thereby interrupting a musical flow which to that point was steady and uninterrupted.

That (over) extended spoken-word interval turns into nothing more than a slightly witty intro to the short, sweet shuffle (and political statement?) of "Kicked His Ass Out." Another authentically rootsy number that might better have lasted as long (or longer) than the talking it follows, it would have thus punctuated and remained of a piece with all those cuts that precede it on Alafia Moon.

Leave It Alone; I've Been Low; Alafia Moon; Make The Best Of Your Time; The Guitar; Hip To Your Trip; Some Things Change; Taxman; Wanda; The Umbrella; Kicked His Ass Out.