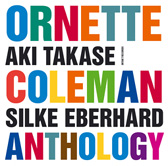 Is pianist Aki Takase making a point of releasing an outstanding duo CD every year? Spring In Bangkok (Intakt Records, 2006), in the company of vocalist Lauren Newton, was a model of in-the-moment creativity, and whilst the reasoning behind this latest release is radically different, the end result is equally stimulating.

Tackling a two-disc program of pieces by saxophonist Ornette Coleman might have been a challenge for both musicians present here, but the results suggest it was anything but. The downright tricky opening unison on "Cross Breeding" is handled with extraordinary aplomb and also serves notice that Silke Eberhard is a reed player to watch. Her bass clarinet playing is admirably self-contained in the sense that it shows little overt influence of either Eric Dolphy or David Murray, and she imbues the unwieldy horn with a certain grace even in its lower registers, as on "Free," where Takase makes the keys ring in a fashion some less open-minded pianists can only dream about.

In places Eberhard's alto saxophone playing shows traces of Lee Konitz's deeply considered approach, but on "Mr. And Mrs. People" her own considerable musical personality on that horn comes to the fore, especially when it's spurred on by Takase's exercises in rhythmic displacement.

The duo is acutely alert to the humour in Coleman's music, as per the clarinet-piano duo of the opening "Turnaround," where the ungainly elegance of the melody is allowed to ring through sheer simplicity of approach. This is one of those happily infrequent occasions over the course of the two discs where the two women assume the roles of soloist and accompanist, but when Takase steps out on her own she melds Coleman with pianist Thelonious Monk in a way which suggests this is music reinvestigated, as opposed to music subjected to the clinical reverence for the notes that the notion of repertory might imply.

Over the course of both discs no less than thirty two Coleman pieces are covered along with one by Takase ("Dedicated To OC-Doughnut"), and in a sense the lack of expansiveness that implies is one of the set's many strengths. Thus the one minute and twenty three seconds of "Round Trip" on the second disc is a model of concentrated communication, with Eberhard spinning out some coruscating phrases on alto before the theme reprise.

"Peace" is taken at a slower tempo than the Coleman quartet's original reading; Takase's exercise in taking the thing apart and reconstructing it in a new way exemplifies how Coleman's music is individual enough to withstand such close scrutiny. The point is underscored by Eberhard when her turn comes, and the dry, slightly acerbic quality of her alto is both well suited to the music and a diametric opposite to Coleman's work on the same horn.

At over seven minutes "Face Of The Bass" is given one of the lengthier treatments here and such is the duo's empathy, with each other and for the music, that not a second of the time is wasted. Eberhard explores the upper register of her bass clarinet in the wake of some ruminative low end variations, and in her solo Takase utilises her left hand in a manner so intriguing that the listener might rue the absence of a piano in those early Coleman groups. It's certainly the case that the depth of her musical intelligence is such that she can imply all sorts of harmonic variations.

All in all, those end-of-year polls have got themselves another entrant here. Regardless of its age, and some of the compositions here are almost half a century old, this is music worthy of the deep re-investigation going on here, and the listener reaps abundant rewards.