Pan-Scan Ensemble: Air and Light and Time and Space 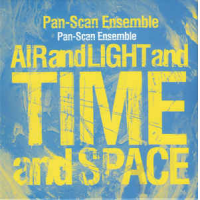 For many years, Scandinavian jazz and improv have mixed and matched musicians with no great concern about their nationalities. While the music has maintained its high quality, most listeners have not been overly concerned with the players' countries of birth. Now, as its name suggests Pan-Scan Ensemble has adopted a pan-Scandinavian approach and brought together nine fine players from across the region. Far more exciting than the ensemble's roots is its line-up of three female saxophonists and three male trumpeters alongside piano and two drummers, instrumentation that whets the appetite for the music. The band was put together by its drummers, Paal Nilssen-Love and Ståle Liavik Solberg, for a December 2016 Christmas concert at the Blow Out festival at Oslo's Mir club.

Air and Light and Time and Space was recorded live that night and features two tracks, appropriately entitled "Air and Light" and "Time and Space," the former running for twelve-and-a-half minutes, the latter for thirty-three-and-a-half. Although this was the debut performance by the ensemble, its members have a wealth of experience in large groupings to draw on, in such notable ensembles as Fire! Orchestra (alto saxophonist Anna Högberg, alto & tenor saxophonist Lotte Anker, trumpeter Emil Strandberg, pianist Sten Sandell), Angles 9 (trumpeter Goran Kajfeš) and Nilssen-Love's Large Unit (alto saxophonist & flautist Julie Kjaer, trumpeter Thomas Johansson).

Such experience explains why the music has no awkward "getting to know you" period at the start. After an extended drum duo leading into a trumpet solo, everyone else joins in, with a vengeance. Thankfully, the music does not turn into a procession of individual solos; instead the horns operate more as a coherent unit, lines overlapping and criss-crossing, with an individual voice occasionally bubbling to the surface, supported by the others, before returning to the ranks. Sandell's piano is a subtle presence, never hogging the limelight but adding support and coloration that is vital to the mood of the music. While adding full-on rhythm work when needed, Nilssen-Love and Solberg themselves can be just as subtle when the mood requires, adding percussion as detail and punctuation.

Ultimately, though, this band is not about the work of individuals but far more about nine musicians working together and pulling in the same direction to produce a collective triumph. Time and again, the music boils up into thrilling climaxes that set the pulse racing. Live, this must have been one hell of a gig to attend! Happily, this excellent recording has captured it well and conveys its excitement. We must hope that Pan-Scan Ensemble was not created for one night only but records again soon.

Air and Light ; Time and Space