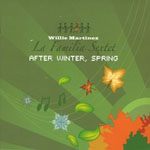 The sophomore effort from the Latin jazz drummer Willie Martinez's La Familia Sextet, After Winter, Spring, is a bright and breezy journey into tipico territory marked by tight arrangements of melodically appealing original compositions and arrangements over a wide variety of swinging Afro-Caribbean rhythms. An experienced pro with tenures under the leadership of Chico O'Farrill, Hilton Ruiz and Norman Hedman, to name only a few, Martinez has assembled a band of similarly seasoned associates to make his own engaging brand of music, proving himself to be just as capable a leader as he is a sideman.

The sextet is distinguished by its bottom-heavy frontline featuring baritone saxophonist Max Schweiger (best known for his work with the Chico O'Farrill Orchestra) and trombonist J. Walter Hawkes (a veteran of JC Hopkins Biggish Band). Martinez is joined in the rhythm section by pianist Misha Tsiganov (a colleague from Hedman's Tropique), along with bassist Jennifer Vincent, newcomer conguero Cristan Rivera and, on a few tracks, returning percussionist Renato Thoms.

Martinez' lyrical originals comprise half of the disc's eight selections, including the buoyantly bopping title track and the sizzling samba "Para Los Bravos." On the salsafied "Cayey," a dedication to his grandfather, the leader acknowledges his Puerto Rican roots, employing a tipica plena rhythm featuring Thoms' pandeiros while on "Helen," a memorial to his late mother, he reveals his more romantic side. Two more pieces come from band members. Schweiger's "Willie's Blues," the band's new theme song, is somewhat reminiscent of Dizzy Gillespie's Latin- influenced work while Tsiganov's closer "Anthony" (dedicated to the late Tony Williams) recalls Bud Powell's "Un Poco Loco." On the remaining pair of tracks—Martinez' arrangement of Bobby Hebb's pop classic "Sunny" and Hector Martignon's orchestration of the Pepe Delgado bolero "Cosas de Alma"—the leader also proves himself to be a capable vocalist, in both English and Spanish.