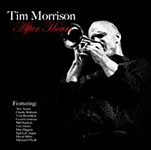 This Is Your Brain On Music (Dutton, 2006) is a interesting book written by musician/neuroscientist Daniel J. Levitin, Ph. D. In it, the author describes the underlying neurophysical mechanisms that enable us to hear, interpret, recall, and emotionally connect with musical sounds. By no means a scientific treatise, Tim Morrison's After Hours can, however, be described as a sonorous experience for the ear, mind and soul.

Morrison is one of Hollywood's first-call trumpeters. His is the sound—and an especially recognizable one at that—that moviegoers hear on classic films including Amistad (1997), Saving Private Ryan (1998) and Apollo 13 (1995). If Frank Sinatra was "The Voice," then Tim Morrison is, indeed, "The Sound."

Coming from a predominantly symphonic and Boston Pops musical background (although initially influenced by his jazz playing musician father), After Hours is Morrison's debut as a leader, and, it's a most enjoyable one. The title suggests that Morrison and his musical associates may have recorded this collection of easy listening selections and jazz standards after busy days in the Hollywood recording studios, constrained by the demands of film scores.

After Hours is, indeed, relaxed, easy listening. There's nothing adventurous, no extended improvisations or anything resembling cool or smooth jazz here. The solos are tasteful, melodic and easy on the ear. The CD is a soundstage from which Morrison and crew send up ten classics heard many times before—at times, ad nauseam. However, unlike bland elevator music or Plays for Lovers compilations, Morrison's sound is engagingly unique and emotionally captivating—a highly personal and expressive sound, even though all the melodic lines, lyrics and expected emotional tugs are familiar. Morrison's takes on "The Shadow of Your Smile," and the bossa classics ("Desafinado," "Meditation") are elegantly beautiful.

Backed by a superior group, Morrison's relaxed trumpet sound glides effortlessly over melody ("{Laura," "Summertime") and underlying, undisclosed lyric ("What'll I Do?," "Alfie"). His is a supremely vocal style wherein sound, dynamic, nuance and expression prevail. There is so much here to savor, with the recording balance and production values, as one might expect, Hollywood excellent.

Whether or not Morrison performed on any of the Harry Potter movies scores, his trumpet sound is sheer wizardry. After Hours delights, delivers and entices, leaving hopes for a sequel to come.