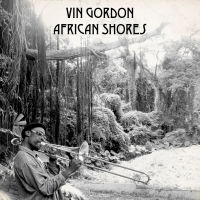 In 2019, British saxophonist Nat Birchall is celebrating twenty years as a bandleader. His specialism is post-John Coltrane spiritual jazz. Since 1999 he has released an album every two years or so. The most recent was the outstanding Cosmic Language (Jazzman, 2018). The next is due later this year. Fittingly for an anniversary year, it will be Birchall's first 2xLP set.

Before Birchall became a jazz musician, his big love was reggae, which is where African Shores is coming from. The album is released on Birchall's reggae-focused label Tradition Disc. It is headlined by Jamaican trombonist Vin Gordon with Birchall sharing the frontline and the writing credits.

Birchall grew up during the 1970s, reggae's belle epoque, when the style which became known as "conscious reggae" carried the swing. He made weekly shopping trips from his rural home in the north of England into nearby Liverpool to pick up the latest Jamaican imports from specialist shops in the city. Many of the discs Birchall bought would have included Gordon in the line-up. The trombonist joined the ubiquitous studio band the Skatalites in 1964 and went on to play on literally hundreds of sessions during the ska, rocksteady and reggae eras. Coxsone Dodd's Studio One label was his home from home.

On the rear sleeve of Sounds Almighty, Birchall wrote that it was "respectfully livicated to the great Jamaican artists who originated this music." Artists, that is, such as Gordon. The album did them proud and was greeted with widespread acclaim. African Shores will create a similar buzz. Rocking rhythms, four horns, fundamental bass and drums, a mellow vibe and in the tradition dub versions. You can feel the sunshine. You might also smell the sensi or taste the rum, depending on your recreational preferences. Either way, the music is vibey enough to put a smile on the face of an Easter Island stone-head statue.