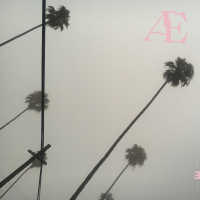 On first listen, Anton Eger's eponymously titled debut album shares similarities in its execution with the some of the recordings of Joe Zawinul and Django Bates, and Frank Zappa's Jazz From Hell Synclavier phase. Despite the irritating hieroglyphically devised song titles, there is actually real substance to the ten compositions. For over ten years Eger has been the backbone of Jasper Høiby's extraordinary trio Phronesis but now it's his turn to lead. For the purposes of this review (and brevity) the pseudo-chemical element suffixes to the track titles and the +++'s are ignored.

The multi-layered "HERb" is immediately engaging and intriguing, the electronica underpinned by vibrant bass and melodic swirling synthesizer lines. "Oxford Supernova" ends with a bouncy reggae coda which stops abruptly whereas "datn" sails perilously close to musique concrète which The Beatles briefly adopted on "Revolution 9." By contrast, "IOEDWLTO" opens with sublimely hypnotic intertwined themes which progress through upbeat and finally sombre moods. "Sugaruzd" is more cohesive with a consistent percussive beat as is the toe-tapping rock-inflected rhythm of "Monolith." "Severn B" benefits from a subtle melodic charm which evaporates in its final minute with drum and bass pyrotechnics. The languid elegance of "Sufflör" is infused with Juliette Marland's spoken French vocals which add a certain melodramatic je ne c'est quoi to the mix.

It's difficult to adequately summarise this remarkably novel approach to composing. The high level of synth-based utilisation dominates much of this recording's forty minutes duration. Occasionally, it's almost as if the electronics act as camouflage to somehow disguise the melodies which are undoubtedly present. However, the overall effect is remarkable, the music succeeding on multiple levels thus making for compelling listening. With reference to the opening observations above, Eger has created his own terms of reference here and there is absolutely nothing derivative about it. It's doubtful that they'll be anything like it again until the release of his follow-up album.