By Roger Farbey
November 14, 2018
Sign in to view read count 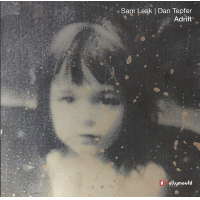 Adrift is an unusual recording featuring two pianos in an original work by Sam Leak. It's hard to neatly categorise since it presumably draws its influences from a variety of sources. It could be described as neo-classical, minimalist or chamber jazz but is most probably a mixture of all these elements since it assiduously resists any generic definition. Leak might have been influenced by a whole swathe of composers; the ghosts of Erik Satie, Arnold Schoenberg, Duke Ellington and perhaps even Frank Zappa seem to appear fleetingly within this thirty minute suite.

The eight parts segue seamlessly, the pastoral opener "Adrift I" sets the mood for the ensuing seven sections and never veers substantially from that feeling of floating or drifting snow. "Adrift II" takes up the mantle of its predecessor but changes halfway into a sprightly variant. The single note flurries of the two pianos on "Adrift III" present a more angular change in direction but the chordal lyricism resumes with "Adrift IV." The fast-paced "Adrift V" packs-in a considerable wealth of notes and manages to insinuate some unequivocal jazziness into the proceedings. The upbeat "Adrift VII," pivoting around a left hand oscillating vamp brilliantly shifts from channel to channel. Finally "Adrift VIII" is a short near-reprise of the limpid opening.

The piece was originally written for the 2014 Steinway festival, held at London's Pizza Express Jazz Club but the success of the performance led Leak and his co-performer, NYC-based Dan Tepfer to record Adrift at the Yamaha Piano Rooms in Midtown New York in January 2016. However, another recording of Adrift made during a Pizza Express Jazz Club gig in December 2017 featured the Sam Leak Trio with Simon Read on bass and Will Glaser on drums. This affords a whole new dimension to the suite and as can be witnessed via the YouTube recording of the performance, the dynamic is completely different to the two piano version. Arguably it would have been useful to juxtapose the suite's two differing configurations on one record because the running time here is a tad short. Also it would have been interesting to know which pianist played through which channel but that's a minor issue. That said, this is a masterly and hypnotic work which lingers at length in the listener's mind.