By GLENN ASTARITA
September 7, 2012
Sign in to view read count 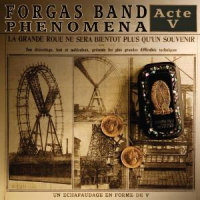 Drawing comparisons to a pro football team, this band would most assuredly make the playoffs every year. Highly acclaimed, the French unit led by drummer Patrick Forgas looms as a proven commodity within the upper echelon of progressive rock. The album presents a potpourri of fusion and jazz-rock that translucently incorporates the blitzkrieg improvisational segments of familiar persuasions, yet the artists' bring much more to the table.

One of the trademark components of the septet's sound is attributed to an artsy melding of attractive melodies, somber interludes, and yearning choruses, often spiced with blaring horns and regimented arrangements. However, they often shift gears rather seamlessly, with all the complex parts liquefying into alternating cadences, marked by sonorous theme-building episodes. Here, the band does not disappoint, abetted by memorable compositions and subtly rendered paradigm shifts.

The multihued saga continues throughout the majority of the album as rhythms transform into regenerated motifs tinted with fragmented ostinatos, orbital passages, and energized improvisational forays. However, the septet often aims for the heart, where it triumphantly merges passion, power, nuance and classical inferences that are staples of its ongoing constitution. Also included is a DVD of the band performing live at the now defunct NEARfest prog-rock gala in Bethlehem, PA.