Al Di Meola: Across the Universe 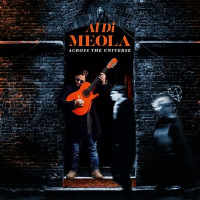 Al Di Meola's Across The Universe reaffirms how ideally the music of The Beatles translates into the eclectic style he forged early in his career. It's not as if the multi-instrumentalist/composer hadn't already made the point with All Your Life (inakustik, 2013), but this second, similarly conceived album is not only worth savoring repeatedly on its own terms, but as a reliable point of departure to rediscover both the source material and Di Meola's own discography.

The mix of acoustic and electric guitars on this ideal opener, "Here Comes The Sun," hearkens all the way back to Di Meola's third solo record, Casino (Columbia, 1978). And just as he had broadened upon the instrumental foundation of Land of the Midnight Sun (Columbia, 1976) and Elegant Gypsy (Columbia, 1977), so does he achieve the same end here with the addition of percussion on "Golden Slumbers (Suite)." The segues of the multi-part composition from Abbey Road (Apple, 1969) has long been a major stylistic component of Di Meola's work, dating back to work with Return to Forever on Romantic Warrior (Columbia, 1976). As are those Spanish elements he injects into "I'll Follow the Sun" via his flamenco guitar as well as Randy Brecker's trumpet.

There are even more subtle mixes of concept and execution here, the nuances of which come through perfectly clearly in the pristine audio of Across The Universe (kudos there to Katsuhiko Naito for all the engineering). The expansive take on "Norwegian Wood," for example, courses with a variety of Indian motifs the likes of which were so prevalent in latter-day Beatles records via George Harrison. But in addition to the precision picking of Di Meola's and the tabla work of Amit Kavithar, that arrangement features a diversity of instruments including brass played by members of the New Jersey Philharmonic.

Through that very same texture, this time courtesy a horn section of Derek Wieland's, this cut dovetails smoothly into "Mother Nature's Son," in so doing becoming of a piece with this rendition as well as the quiet original on The Beatles, a/k/a The White Album (Apple, 1968). Al Di Meola displayed a definite measure of courage in his selection of Liverpudlians' material on the album preceding this one and he performs bravely here too: opting to record "Strawberry Fields Forever" allows him to illuminate not just the unusual changes in the song's structure, but the alternately lovely and disquieting melodic themes.

In contrast, the layered guitars amplify the bittersweet air of "Yesterday." while the gentle touch Di Meola applies to the strings is evidence of his reverence for this tune of Paul McCartney's. That said, over the course of these fourteen cuts, Di Meola betrays no real preference for the individual composers within the Fab Four: even Ringo Starr is represented here, appropriately enough with Di Meola's three-year-old daughter singing on a brief nod to "Octopus's Garden" at the close of this roughly one-hour playing time. Nevertheless, there's no mistaking the implicit homage to John Lennon in this front cover photograph: it's an image similar to that which adorned his LP Rock 'n' Roll (Apple, 1975). And then there's designated title of this very album, named for one of the Lennon's tunes circa Get Back/Let It Be (Apple, 1970).

Suffice it to say, however, that those dual gestures of affection, telling though they may be, are in fact the least of the deeply memorable impressions left by Across The Universe. On songs such as "Hey Jude," Al Di Meola maintains a supremely artful balance between that which is familiar and his novel expansions on that groundwork, the end result of which should be equally moving for listeners who know this music by heart as well those music lovers for whom the record will constitute a different kind of epiphany altogether.