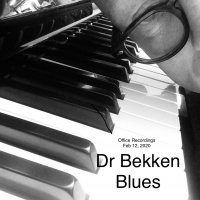 Tor E Bekken is also known in the music world as Dr Bekken. As well, he is known as a distinctive pianist who unearths the blues like a bloodhound on a case. Over the past several years, he has unrooted blues from their deep origins and, consequently, replanted them in fertile ground with even more room to grow and blossom. Studio albums, live recordings, original compositions, and fresh looks at vintage harvests have all grown to maturity in Bekken's fruitful garden. While occasionally setting foot in surrounding soil, it is the blues which floods through his veins, irrigates his brain and, most certainly, courses through his uninhibited and free flowing fingers.

This new solo record indeed starts anew, from the beginning of the blues. These are not random blues songs. All these original works from Bekken tell a continuous story from the first song to the last. There are no hidden messages. The blues started in a defining moment which connected people in the realization of strife and hardship commonality. That essence is revealed and examined in "Blues Spirit." The blues are in no hurry. Here Bekken weaves in and about the sensitivities of its creation and the often, cold realities of life. The spirit is captured and rendered with a balance of shared knowledge and inner clench. "Blues for Spann," then, not only honors pianist Otis Spann, it illuminates and shares the intuitive grasp that Spann projected in his playing. Yes, it pays homage to a blues master that always played to the heart of the matter. Moreover, it illustrates the trajectory of blues development in time and space.

"Blues De Lux" moves on to the joyous upbeat boogie-woogie leanings of the blues. The hard times reflected in the blues oft times are demonstrated in a need to let loose, let it go, and to free oneself of burdens, if only for a time. "Blues De Lux" also showcases Bekken's strengths as a pianist. It takes a strong left hand to do this justice. The foundation of said justice is set in concrete, while his frisky right-hand frolics like there is no tomorrow. A fine representation of this historical movement of the blues, as well as some powerful movement on the keys.

The most common and identifiable moods of the blues are that of somber depression, and melancholy. It's all at the next port on this blues cruise. "Blues Melancholy" is well placed after the rambunctious nature of "Blues De Lux." The highest high contrasts the lowest low. On this over nine-minute exodus, Bekken slowly and meticulously walks the road of despair while squeezing every nuance out of his keyboard in a heartfelt performance. This is a strong composition, well designed to take listeners into the darkness with only brief and subdued flickers of light.

The blues will take listeners down, but not out. Bekken wraps his learned odyssey of blues evolution by doing what generations have done before him. The chin-up mantra of "Pick yourself up, dust yourself off, and start all over again" is celebrated with verve. Bekken exits stage right with the vigorous gait of "Blues in Stride," but not before dazzling his finery to the unflappable beat of life.

Having gleaned what they will from the good doctor's historical perspective, the authenticity of Bekken's unharnessed and lively touch will draw in listeners' ears and chase away the blues.