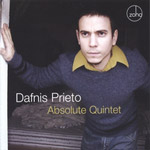 Dafnis Prieto's latest release on the upstart Zoho label is The Absolute Quintet, a startlingly eclectic and occasionally maddening album. He creates strange shapes and shifting moods, which are handled adroitly by his bandmates in a unique bass-less setup. Violin and cello scrape against sax and organ, with Prieto's all-over drumming attempting to forge some unity. Prieto traces his influences back from Cuban culture to European chamber music and African percussion, and he seems to have assimilated them whole. These are no mere regurgitations, but freewheeling mash-ups that create entirely new species.

"The Coolest" is one such strange bird. Influenced by vocalist/rapper Carl Walker of the hip-hop group Opus Akoben and feeling like a tango performed by Weather Report, it's unclassifiable. The leisurely piano melody, buffeted by rumbling organ chords, stops time for a rapid-fire vocal solo. Then it swings back to its unassuming business, replete with tasty drum fills, feedback-soaked solos and a cowbell-tinged close. The key is its unselfconsciousness and the ease in which it jerry-rigs conflicting styles. Prieto makes it seem natural.

Not that he can't do normal. The gorgeous ballad "Afrotango" is anchored by the mellifluous blowing of Henry Threadgill (with whom Prieto worked on two Pi releases in 2001), who is backed up beautifully in a pizzicato chorus by Christian Howes and Dana Leong on violin and cello, respectively. Jason Lindner adds a mountainous solo of his own, peaking in reverberating swirls.

The centerpiece, though, is the conceptual "One Day Suite," a meditative three-part piece which reflects the shifting moods of a single 24-hour period. It's a monumentally understated performance, beautifully modulating in tone from the twinkling optimism of "Morning" to the resigned serenity of "Night.

R. Emmet Sweeney lives in Brooklyn and writes for the Village Voice and himself.