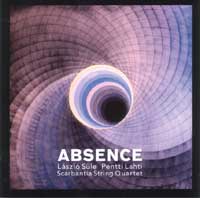 Jazz and classical music have been merged before with different consequences. Happily, this venture rises above the mundane and the obvious. The architects of this edifice are László Süle and Pentti Lahti, both residents of Finland. The former is the jazz personality; the latter prefers calling himself a folk musician. The dynamics most certainly bring depth and allure to the music, and when they nestle against the string quartet, the enticement is undeniable.

Süle composed and arranged all the music. He uses several elements to purvey his feelings. Folk music brings in "Morning Prayer." Lahti's saxophone cries in yearning entreaty, yet it fathoms hope as it soars high. The string quartet in unison forms the bank, and Süle churns the current in eddying pools on the piano and then ushers in the waters of calm as he carries the tune with eloquence. But he is an innovator and the rush of notes swirl in, spiralling the spirit of the tune to a logical end. The whirl of classical motifs colour "Stone Flower"; the strings sing a bright tune and open the vista for the flute of Lahti, who bends the notes and takes them through twisted alleyways, when Süle takes over and develops rich layers on the piano. Zoltán Takács, the leader on "Absence," is a warm, sensitive musician who brings in a virtuosic depth to the ballad. Lahti clasps the thread on the saxophone and passes it on to Süle. The ensemble locks in and passion becomes the keyword. The music captivates.