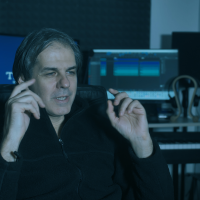 Jazz pianist/composer Tihomir Stojiljkovic was born in Leskovac, Serbia. In his debut album „Solo“, the first part of a trilogy, we discover the treasures of Balkan musical heritage, tastefully reinvented through the language of modern jazz.

At the age of six, Tihomir started playing mostly traditional music on the accordion. By the age of sixteen, he improvised in various musical genres on keyboards. In his early twenties, he developed his own piano style that he would later qualify as Balkan jazz.

Tihomir is a self-educated jazz musician, who was raised in a not-so-jazzy environment and barely had the use of a real piano. His musicianship evolved from years of wandering, listening to his heroes (Keith Jarret, Paco de Lucia, Chick Corea, John Mclaughlin, Thelonious Monk, Billy Cobham, and many others...), and collecting every piece of knowledge he comes across, he gradually painted the big picture he was holding in his heart.

"Learning to play jazz was not the only challenge for me, but also to sound in a particular way, determined by my background... I had to take a completely unknown path, in every sense of the word...“

The second part of a trilogy "Solo Update", in which he will take us in his remarkable way further on the journey through the Balkans, is out on Feb 21, 2022.

All About Jazz musician pages are maintained by musicians, publicists and trusted members like you. Interested? Tell us why you would like to improve the Tihomir Stojiljkovic musician page.