Mike Mizwinski: A Year Ago Today 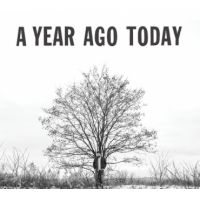 There's a photo of Mike Mizwinski on his website populated with background images of artists ranging from Eric Clapton and Steve Winwood, The Who, the Avett Brothers and the String Cheese Incident. Speaking volumes about this man's eclectic approach to music, this pictorial evidence also suggests much about the freewheeling attitude Mizwinski displays on A Year Ago Today, an album of songs replete with self-awareness and rendered with a distinct camaraderie between the author and his accompanists.

The man's original songs take precedence here and the subdued "I Ain't a Kid Anymore" isn't the only one radiating a self-deprecating charm. But tunes such as "Being Good At Being Blue" provide structure for arrangements in which his verbal turns of phrase move in equally unpredictable directions. Like the corollary pedal steel and electric guitar on the aforementioned track, Mizwinski's a man with a brain as well as a heart and he proves himself equally in touch with both by the time the album concludes.

Still, A Year Ago Today isn't the work of a merely binary being. Michael Borowski's electric and acoustic pianos dominate "New Love," while the lissome voice of Emily Glodzik weaves in and out of that instrumental backing. The viola of Mark Woodyatt on "Please Don't Say Goodbye" sounds both spare and evocative, its impact bolstered when Mizwinski's voice ascends to falsetto just before he picks a mandolin. And the knowing production of A Year Ago Today accounts for the rippling electric guitar immediately following: "North Jersey Queen" very effectively changes the pace.

Acoustic strumming on "A Lunar Lullaby" confirms this multi-instrumentalist/composer's songs stand on their own merits. Yet even the instrumental called "The Porcupine" doesn't sound at odds with this songwriter's verbal expression—or redundant for that matter: Mike Mizwinski just loves to play too. And while this track might be better suited as climax for this album, it's positioning near mid-point of the LP makes even more sense: as an interlude in combination with the slightly foreboding "Heroes," it seems to signal the homestretch of the record.

The solidity of the ensemble on "Anymore" injects further continuity into A Year Ago Today. But Mike Mizwinski and company confound expectations through the final note that sounds on "Stay Today Forever," reaffirming an impression that, while the leader knows exactly where he wants to go, he refuses to take a predictable route getting there.