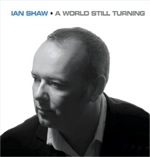 I know I'm late to the party, since Briton Ian Shaw already has two Milestone CDs out in North America, but I've only recently "discovered" him with his first release for 441 Records, that new label run by seasoned hands. I have only one word for his music—yowpers! —but will be pleased to elaborate.

In a world currently rather short on male jazz singers, and positively deficient in those who are both gifted and sincere—as opposed to being annoyingly mannered or Sinatra copycats—Shaw grabbed my lapels with the first track. He's taken that '70s pop hit by Gilbert O'Sullivan, "Alone Again Naturally," blown off the dust, strained all the treacle out, and replaced it with soul. With just his voice and his own fine piano playing, it becomes a searing and direct personal statement. Who knew?

And yes, that voice... It's supple, strong, rangey, and utterly compelling, smooth or rough-edged in the service of telling the song's truth—and his own. His phrasing is natural and completely convincing. The material includes Kurt Weill, David Bowie, Elton John, Radiohead, Randy Newman, Alan Broadbent/Mark Murphy, Jimmy Dorsey and Bob Dylan; all of it transformed and reborn through Shaw's singular style. He stands squarely in the jazz tradition—influenced by Mel Torme and Sarah Vaughan, among others—but seems to be inventing his own at the same time.

This is the kind of CD that will stay in "repeat" mode for a long time to come, as its many facets reveal their gleam. For now, it's enough to hear the opener and "Soon as the Weather Breaks," the killer blues duet with Mark Murphy, the funk/rock/blues version of Dylan's "You Gotta Serve Somebody," the stark, tender, chill-inducing "I'm Glad There is You," with just Billy Childs' piano backing Shaw, and Shaw's own "Rockabye"; the story of a mother fearing for her son who's fighting a desert war, which brought me to my knees. We have a son in Iraq, but the song's intensity will move anyone who sees the tragic insanity of our current engagement (and wars in general, for that matter). And then there's "This is Always" a little-known beauty from Mack Gordon. And...

Oh. Did I mention that the band is superb? I've always loved Billy Childs, and Paul Bollenback's guitar commentary is exquisite. Eric Alexander enriches three tracks with his big tenor sound, Peter Washington has his usual masterful sense, and drummer Mark Fletcher, hitherto unknown to me, is just right.

I hear Shaw will be in the States in November and January. If I have to take a thermos, blanket and lawn chair to wait for a ticket, I'll be there.

Alone Again Naturally; We All Fall in Love Sometimes; Peace; Soon as the Weather Breaks; Rockabye; Don't Ask Why; Speak Low; Gotta Serve Somebody; I'm Glad There is You; Guilty; The Tourist.