By DAVE WAYNE
December 3, 2013
Sign in to view read count 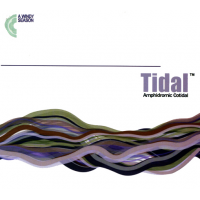 This album fooled me, and I am not afraid to admit it. A subset of the EA Orchestra, whose recent recording (Likiedos, Amirani Records, 2011) focused on the compositional aspects of avant-garde large ensemble music, A Windy Season is a wind quartet that—at first blush-seems to traverse similar terrain on Tidal. A quick perusal of the liner notes made me blush: the music on Tidal is completely improvised. Or, more precisely, A Windy Season refers to their creations as "instant compositions." And perhaps that's the more fitting term, because this music got me thinking about the related processes involved in composition and improvisation. As improvisational music continues to move beyond the boundaries of jazz, rock, or ethnic music, how is it going to change? When one considers the music of A Windy Season, some very interesting questions arise. The interplay throughout this album is detailed and precise. There's thematic material, or at least extended passages that sound like melodies and themes. These often frame solos or group improvisations in much the same way that the composed material on Likiedos did. There are definite jazz elements here, but the music, taken as a whole, isn't necessarily free-jazz-as-we-know-it. When the quartet moves from one motif to another, or decides to end a piece altogether, the transition arrives seamlessly and definitively. But it's all made up on the spot.

The overall feel of the music varies quite a bit. One constant, however, is the reverberant room sound, which becomes a bit of a "fifth player" on several tunes. Members of the quartet move around in the space while playing, thus adding an extra dimension to the overall sound. Soprano saxophonist Gianni Mimmo introduces "Ebb and Flow" with a convoluted, screwball melodic figure that trumpeter Mirio Cosottini picks up immediately. They run with it for a bit over the plodding contrabassoon before dropping the tempo to match the bass line as Angelo Contini's spooky muted trombone slowly, and quite literally, moves to the foreground. The long unisons in "Line and Its Fragility" are dry and seemingly close-miked, but these give way to the warmer, richer long tones that begin "Humpback Song." One of the album's more abstract and clearly improvisational pieces, "Rogue Wave," rides in on Contini's buzzing didjeridoo and Alessio Pisani (bassoon)'s malevolent contrabassoon, as soprano saxophone and trumpet skirl and wheel overhead. Mimmo, one of Europe's finest soprano saxophonists, drives the action on "Bay Lyric" as the other horns call-and-respond in various highly coordinated ways before they settle into a sort of chorale behind the soloist. The centerpiece of Tidal is the sprawling 18-plus minute-long "Westerlies Tale." Trombonist Contini dominates the first third of the piece, and the quartet gets into some fascinating textural explorations using various sorts of drones and long tones. These are interspersed with unaccompanied solos by each member, and a number of interesting thematic-sounding passages. Other highlights include the ghostly, incantatory "Amplitude and Cycle Time," and "Amphidromic" which is held together by Pisani's funky, braying bassoon lines.

It's tough to compare A Windy Season to any other group in a jazz context. The closest comparisons may well come from outside of the jazz realm. Groups such as Belgium's Art Zoyd have similar drummer-less (and at times, bass-less) instrumentation and, like A Windy Season, mix non-jazz improvisation and composition in different ways. But, overall, A Windy Season is a really unique group whose experimentation has yielded a sort of improvisational chamber-jazz that doesn't come off like a dry academic exercise. The music on Tidal is an exploration of sound and interpersonal relationships that is warm, human, and at times quite visceral.

About A Windy Season