By MATT MEREWITZ
October 8, 2003
Sign in to view read count 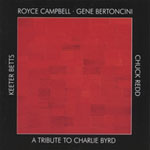 Sharing a rare commitment to the mastery of their instrument, jazz guitarists have a strong bond to an axe which – despite huge popularity in other genres – has by and large, seemed to elude jazz throughout the music’s history. When thinking of true non-crossover jazz guitarists, only a handful come to mind: Django Reinhardt, Charlie Christian, Wes Montgomery, Freddie Green (only in terms of longevity, not originality), and Grant Green. George Benson’s roots were in straight-ahead but he eventually sold out to the tasteless modern aesthetic of smooth jazz. And then there was Charlie Byrd. In terms of legends, that’s really it!

In a century when guitar became the most widely heard and played instrument in the world, namely in non-jazz settings, jazz guitarists’ dedication to their trade is admirable since they represent a handful of instrumentalists that dared to delve head-on into the jazz idiom. If you think about it, the aforementioned can only truly be called jazz legends, compared to the throngs of saxophonists, trumpeters, pianists, bassists, and drummers out there credited for great contributions to the music’s development.

When asked to do the tribute album, Campbell thought it fitting that Bertoncini be on the project. Having worked closely with the man who had greatly influenced the introduction and acceptance of the Brazilian bossa nova and samba within the jazz world, Campbell appropriately chose to do mostly bossa nova works by Jobim and songs out of the Duke Ellington songbook: tunes that had been close to Byrd’s heart.

While the session is highly predictable and laid back, the solo work is magnificent and the overall artistry of the musicians is masterful. Filling out the quartet is a “who’s who” of DC’s thriving jazz scene. Drummer and vibraphonist Chuck Redd (also of the Smithsonian Jazz Masterworks Orchestra) displays tasteful stick and brushwork, very reminiscent of the Charlie Byrd “feel” – not surprising since Redd had been Byrd’s own drummer for 19 years. And finally, one of DC’s living jazz legends, Keter Betts fills in on bass. You might recognize Betts’ name from several years as bassist for both Byrd and “First Lady of Song” Ella Fitzgerald.