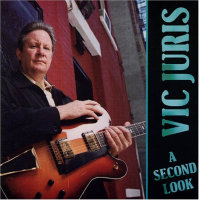 Some performers, like a boxer at the sound of the bell, storm out with something to prove. Musical assertiveness can be a good thing; certainly harmonic knowledge, physical dexterity, and stamina are all meaningful attributes of any good player. But in contrast to those who feel the need to place these elements on immediate display are others more relaxed about their abilities and, perhaps, more concerned with the deeper meaning of a composition, something that demands a certain surrender of ego. They may provide a hint here and there of their formidable abilities, but their true skill lies in subsuming their talents in service of the song.

Guitarist Vic Juris is one such player. A contemporary of all the usual suspects in contemporary jazz guitar—Scofield, Metheny, Frisell, Abercrombie— Juris has proven, over the course of thirty years and recordings with artists as diverse as saxophonist Dave Liebman, vibraphonist Joe Locke, and singer Mel Tormé, to be a flexible player with a broad stylistic reach. But, curiously, while he's a known entity in musician circles, he's never reached the level of popularity of his contemporaries. A Second Look, may not do anything to change that situation, but it should.

An unhurried player who develops his solos with care, still conveying a completely spontaneous feeling, Juris might be most easily paralleled, at least superficially, with Pat Metheny's more mainstream efforts. Like Metheny, his electric tone is warm and full-bodied, with more than a little reverb to fatten up the sound; also, like Metheny, he's equally apt to employ a steel-string acoustic or classical guitar. He even shares an interest in Latin music, adding Kate Baker's wordless vocals to the Brazilian-informed "Table for One."

But there the similarities end. Metheny has a whole musical language that he's developed over the course of the same number of years as Juris, and is unmistakable for it—in some ways, though, his signatures have almost become his albatross, with listener expectation more a demand to hear them. Juris has his own predilections, to be sure, but in many ways, by not being constrained by the shackles of popularity like Metheny is, he's freer to pursue his muse unencumbered.

Whether on his own compositions, like the up-tempo swinger "Dizzy, Trane and You" and the bossa-informed "Barney K," or imaginative reworkings of standards like "All the Things You Are," with its classical guitar and radically reduced tempo and harmonic reworking, Juris never loses sight of a song's essence. And his choice of bandmates is equally astute. Bassist Jay Anderson and drummer Tim Horner are sympathetic foils and strong yet understated soloists. Dave Liebman may typically be thought of as a more outgoing player, but here he proves equally capable of delicate subtlety, as on "All the Things You Are."

A Second Look, like last year's Blue Horizon (Zoho, 2004), continues to assert Juris' considerable talents in a less-is-more context. To hear someone who is almost insidiously pushing the boundaries of jazz guitar, one need look no further.

A Second Look; Barney K.; So In Love; All the Things You Are; Shades of Jazz; Very Early; Little Brian; Table for One; Dizzy, Trane and You; Indian Summer