A Pair From Pascalito: Citizen Chanteur and Forbidden Colours

By Dan Bilawsky
November 4, 2015
Sign in to view read count
You have to give credit where credit is due: when it comes to turning multicultural pastiche into a unified musical statement, few people can match Pascalito. This light-voiced singer—"world chanteur" by his own definition—effortlessly shifts gears, switches passports, and blurs lines, moving comfortably from bossa nova to chanson to swing to tango with nary a problem.

With his first two albums—Le Blues d'Orphée (Self Produced, 2006) and Neostalgia (Self Produced, 2010)—this Paris-born, New York-seasoned singer established himself as a musical risk-taker. His gentle delivery often belies that fact, but the songs don't lie. He moves in directions that few attempt, removing the standard dressings covering classic songs and reupholstering them with surprisingly different fabrics, and he makes no apologies for any of it. After a period of silence on the recording front, he now returns with a pair of simultaneously-released live documents, furthering his reputation as a global music citizen. 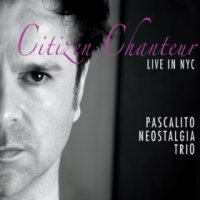 Citizen Chanteur: Live In NYC captures a complete set recorded at the Metropolitan Room—an intimate, unpretentious, vocalist-friendly club in Manhattan. Pascalito is joined by two Brazilians—pianist Luiz Simas and bassist Leco Reis—and he tips his cap to everybody from Luiz Bonfa to Annie Lenox and Billie Holiday to Henri Salvador. In the past, his work occasionally suffered from drastic scene changes and shifts in production style, but none of that is an issue now. It's just Pascalito's wispy vocals with piano and bass from start to finish here, and the man of the hour is in good spirits throughout.

The show opens on "Bossa Nova City," a piece which previously appeared on Neostalgia. There, it felt a bit lyrically malnourished; here, the dressed-down informality of the performance makes it more appealing. Pascalito takes a playful swipe at himself via the mention of critical response to the lyrics and Simas cites "New York, New York" in his outro, cementing the connection between Brazil and the Big Apple. It's the first of many easy-going charmers in the set. As the program moves forward, Pascalito moves every which way. He puts his own spin on jazz-associated classics, overlaying a breezy quality atop the haunting form of "Nature Boy" and using "Gloomy Sunday" as the first stop on a globetrotting medley; he triumphs with the spine-tingling "Les Mots"; and he successfully revisits a few other gems from his past —a refashioned "Here Comes The Rain Again," a soft shoe "Le Blues De La Fleuriste," and a swaying "La Pluie Sur Ta Peau," to name but a few. These fourteen tracks fly by as Pascalito's understated approach works its magic. 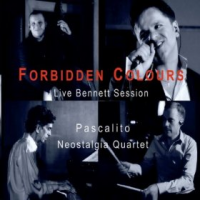 Forbidden Colours: Live Bennett Session—a five song EP that adds drummer Conor Meehan to the group discussed above—doesn't give as full a picture of Pascalito as the full-length Citizen Chanteur: Live In NYC. It does, however, do an equally good job of highlighting his eclecticism. With bookend tributes to French icons Charles Trene and Leo Ferre, an obscure number penned by Ryuichi Sakamoto and David Sylvain, and two originals—the buoyant "Solestagia" and the cool and breezy "La Pluie Sur Ta Peau"—Forbidden Colours says a whole lot in a very short span of time.

The first two tracks prove to be the standouts here, as the quartet delivers a pleasing rendition of the oft-covered "Que Reste-t-il De Nos Amours" (a.k.a. "I Wish You Love") and the genre-defying "Forbidden Colours," but the remaining numbers don't disappoint. Pascalito is always full of surprises, even when revisiting material that he's recorded in the past, and his worldly ways with words and melodies have a unique way of winning over the ears.