Home » Jazz Articles » Tom Keenlyside: A Night at the Espresso

Tom Keenlyside: A Night at the Espresso 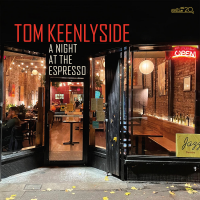 As is true in many professions, jazz musicians must learn their craft before exposing it to audiences. Some, such as Canadian woodwind specialist Tom Keenlyside, remember where and when that happened. His musical education began for the most part at the Espresso Coffee House in Vancouver. Keenlyside has not forgotten that, even after more than fifty years as a guiding light on the British Columbia jazz scene, and pays tribute to his academic roots on A Night at the Espresso, recorded not at the scene of his early musical training but at Pineapple Sound in Vancouver.

The goal is not to re-create what happened those many years ago, rather to capture the aura of energy, enthusiasm and excitement which helped Keenlyside decide to pursue a career as a jazz musician. To help do so, he has enlisted the services of pianist and long-time musical partner Miles Black, trumpeter Brad Turner, bassist Miles Foxx Hill, drummer Bernie Arai, vocalist Melody Diachun and (on the opening number) guest guitarist Tim Porter. Keenlyside plays flute all the way and Black plays piano except for "Pelo Amor de Musica Triste," on which he plays nylon string guitar.

The playlist encompasses half a dozen standards and five original compositions, four co-written by Keenlyside and Black. Diachun sings on four of the evergreens, while Turner is featured (and Keenlyside sits out) on Victor Young & Ned Washington's "Ghost of a Chance." For an album whose purpose is to recall the exhilaration of an earlier time, the choice of material—and tempos—is decidedly laid-back, with only the opening and closing numbers, "Skweet" and "Dave" plus Ray Noble's venerable "Cherokee" and Kurt Weill's "Speak Low" generating much of a spark. The other seven rest somewhere between moderate and mild- tempered.

That includes Diachun's tasteful vocals, on "Speak Low," Cole Porter's "All of You," the Gershwin brothers' "But Not for Me" and Jerome Moross & John LaTouche's "Lazy Afternoon." Everyone plays well enough, but it is not as if they are required to flex any improvisational muscles they have not used before. Keenlyside & Black's "Garden Bay" ambles scrupulously forward behind a nice melodic line, as do "Amor, O Misterio" and "Pelo Amor," the last written by Keenlyside alone. The breezy "Dave," reminiscent of something Vince Guaraldi might have written for a Peanuts television special, wraps the package neatly, with Keenlyside taking center stage and Hill and Black adding crisp solos.

As a showcase for Keenlyside's skills as flautist and composer, A Night at the Espresso succeeds rather well. What it lacks for the most part is fervor, the motive force and sense of discovery and adventure which must have animated those bygone sessions during which Keenlyside received his musical education and inspiration. Well-played, but more demure than free-wheeling.

Skweet; Amor, O Misterio; All of You; Speak Low; Ghost of a Chance; Garden Bay; But Not for Me; Lazy Afternoon; Cherokee; Pelo Amor de Musica Triste; Dave.