By Jack Bowers
February 8, 2005
Sign in to view read count 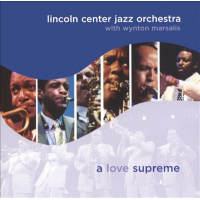 I have to start this review with a confession. I've never heard John Coltrane's original recording of A Love Supreme. Sorry; Trane and I parted ways after some of his earlier successes ( Blue Train, Settin' the Pace, Giant Steps, My Favorite Things ), so I must appraise the Lincoln Center Jazz Orchestra's re-creation of the saxophonist's "monumental work" strictly on its own merits.

As big band jazz goes, this is pretty good, thematically engaging and musically rewarding, even though, as is often the case with the LCJO, Wynton Marsalis' charts owe as much to Duke Ellington's influence as they do Trane's vision. The suite, which is what I suppose one would call it, is comprised of four movements, with a slow introduction and finale encircling its warm-blooded nucleus. The placid "Acknowledgement," near-classical in concept, embodies a number of Ellington-like rhythmic and harmonic techniques, bolstering extended solos by trombone, tenor sax and trumpet and briefer exchanges among several other instruments including clarinet and baritone sax, leading to a vocal chant and peaceful denouement by unaccompanied bass.

Bassist Carlos Henriquez then introduces the second movement, "Resolution," which sets a faster pace, again with a Ducal ambiance pervading its ensemble passages, and ample blowing space for alto sax and piano. The ensemble has the last three and one-half minutes to itself, showing its backbone with precise and powerful give-and-take among the various sections. "Pursuance," the most contemporary of the four movements, opens with Herlin Riley's drum solo and a strapping statement by the ensemble, leading to a brace of spirited solos, most likely by Marsalis (trumpet) and Ted Nash (soprano), and further orchestral fireworks that once more end on a quiet note. The closing "Psalm" is an oasis of earnest supplication in which various members of the orchestra lift their "voices" in a dirge-like hymn to the Almighty, expressing in their own idiom the essence of A Love Supreme.

As noted, I can't compare this with Coltrane's forty-year-old masterpiece, written for and performed by his quartet, but I quite enjoyed the LCJO's expanded version and would recommend it based solely on that unschooled impression (those who worship Coltrane's prototype are free to disagree).