By John Kelman
January 7, 2007
Sign in to view read count 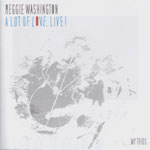 With artists like Norway's In the Country and Sweden's EST reinventing the contemporary piano trio, it's no surprise to hear Reggie Washington turn the traditional sax/bass/drums trio on its side. Washington, a long-time collaborator with M-Base artists past and present, including Steve Coleman, Cassandra Wilson and Andy Milne, manages to both respect tradition and reinvigorate it on A Lot of Love, Live!.

Saxophone trios tend to be either mainstream affairs which maintain harmonic movement through implication, or freewheeling efforts with little, if any, safety net. Washington's approach on this set culled from two different tours with two different trios isn't totally distanced from either tradition. His "Half Position Woody swings with straight-ahead energy, thanks to a strong connection with drummer Stéphane Galland and saxophonist Erwin Vann's fiery approach, as does a loose reading of Wayne Shorter's "Fall, featuring Washington on electric bass alongside drummer Gene Lake and saxophonist Ravi Coltrane. "Reuben's 2 Train, also featuring Lake and Coltrane, exemplifies how the simplest of sketches and the most tenuous of rhythms can inspire greater exploration.

Elsewhere Washington's M-Base background is more up front, especially when he's on electric bass. "Jade 4 Giada is an energetic piece of funk where Lake, Coltrane and Washington seem to be joined at the hip in a remarkable series of stops and starts. "Requiem Pour Un Con is even more booty-shaking: Washington and Galland hold down the groove while Vann's harmonized saxophone creates a bigger sound. Washington keeps the groove, while at the same time defining the harmonic movement on the Lake/Coltrane trio's take on Bill Frisell's almost-standard "Strange Meeting.

Vann's processed saxophone creates a rich ambience for "This One, rendering his lyrical duet with Washington orchestral through looping and harmonizing. Vann and Galland may not be as well-known as Lake and Coltrane, but their intuition, interaction and imagination make it sometimes difficult to tell the two trios apart, especially as Washington mixes up the material by the two trios.

Ending the album with the greasy "Fanny's Toy was an odd choice. The only studio track on the set features Washington alone creating layers of electric bass over a sampled drum track. It's a strong vehicle for Washington the soloist, but it suffers from the lack of interplay that defines the trio material and, consequently, it feels like a non sequitur.

This ending makes little sense on an album of live material that already comes in at about an hour. Still, the majority of A Lot of Love, Live! presents an exciting and contemporary slant on the saxophone trio, marking an impressive debut for Washington as a leader.