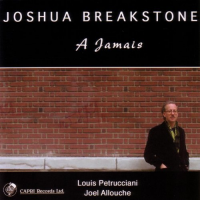 On a balmy evening in mid-January, 2003 on Duval Street in Key West, I was quite surprised to find Joshua Breakstone just concluding his second set at an outdoor cafe. After another hour of music and introductions, I changed my travel plans in order to catch Breakstone two nights later at another Key West venue teamed with the reclusive legendary vibraphonist Teddy Charles in a quartet setting. It's been twenty years since I purchased my first Breakstone album, 4/4=1, on Contemporary; knowing nothing of the artist, I chose it for the tunes and players (including pianist Kenny Barron). Over the years, I've accumulated ten of the fourteen Breakstone albums and have always found that they lived up to my expectations.

A Jamais, or "forever" in French, is no exception to the above. Joshua Breakstone is a facile and very fluent guitarist. While he is a melody player, Breakstone is primarily a leading exponent of bebop guitar and is about as close to someone like Barney Kessel as anyone still performing today. On the other side of the spectrum, there is no resemblance to any of the edgier plectricts like John Scofield. On this session, recorded in France during the summer of 2003, his accompaniests are Louis Petrucciani (brother of the late pianist Michel) and Joel Allouche. In the liner notes, Breakstone provides much justification of these sidemen and correctly assumes that they are mostly unknown here.

Ten of the eleven tracks are originals and several are being revisited by Breakstone, having been recorded on one or more occasions in the past. Breakstone plays solo on Bud Powell's "Hallucinations" and on the ballad "Chanson des Cevennes," written for his French mother-in-law. There is much fodder for discussion here, such as the Breakstone originals that are based upon "Alone Together" and "Cherokee." Suffice it to say, the set list is made up of ballads, burners—or in the case of "Sittin' on the Thing with Ming," a toe-tapping mid-tempo groove.

A Jamais (Forever); B's Way; Taken for Granted; Tomorrow's Hours; Raids on the Unspeakable; 1802; Chanson des Cevennes (Song of the Cevennes); Arriverderci MOMA; Sittin' on the Thing with Ming; On the Wall; Hallucinations