By David Rickert
February 1, 2001
Sign in to view read count 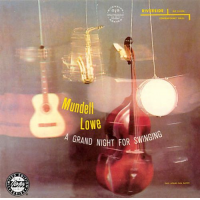 Mundell Lowe has always been on the fringes of the jazz scene, peering over the shoulders of guitar giants like Jim Hall and Herb Ellis and relegated to the long list of those deserving wider recognition. Even the most knowledgeable of jazz fans will end up scratching their heads at the mention of his name. His first album as a leader (reissued recently by OJC) is bathed in obscurity and marked by oddball moves; besides the jingling celeste, Lowe elected to use an organ before anyone really knew what to do with it. Perhaps it was inevitable, then, that Lowe would make his living primarily by working for the NBC Studios and scoring movies like "Satan In High Heels".

OJC has recently reissued another Lowe album, this one entitled A Grand Night for Swinging. The title doesn't promise anything too daring and in general Lowe plays it safe, sticking to relatively pleasant tunes without much edge. The idea here was to rehearse all the tunes a few times and then have a go at them; inevitably, the end result is accomplished playing by relative unknowns that doesn't stray very far from the fence. This is a cool-hued album that swings, albeit gently; it's as if Lowe was trying to be more commercial simply by toning down the proceedings.

However, the sidemen are not always content to be so restrained. The wild card here is frequent Phil Woods collaborator Quill, who peels off darting solos on three numbers. His playing contrast nicely with Lowe's silky, patient lines (which, unfortunately, are sometimes buried in the mix) and everything pops up a notch while he's there. Pianist Taylor (not as well known anymore as Keepnews claims in the liner notes) stabs out punchy chords and at one point in "Blues Before Freud" contributes an interesting solo doubled in octaves. Lowe, for the most part, seems very relaxed but confident, showing admirable taste and restraint.

Mundell Lowe was certainly an accomplished guitarist, if not an exceptional one. A Grand Night For Swinging is marked by sturdy playing with occasional glimpses of originality from all involved and certainly deserves to be heard. Like other albums by so-called "lost greats", this album is extremely enjoyable but won't be lauded as a Holy Grail.

It's A Grand Night For Swinging, Blues Before Freud, Easy to Love, It Could Happen To You, Love Me Or Leave Me, You Turned the Tables On Me, Crazy Rhythm.