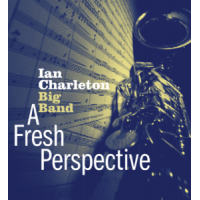 After earning a master's degree in Jazz Studies from the University of North Texas, saxophonist Ian Charleton thought it might be a good idea to join a service band for a short time. He wound up in the Navy and, as of 2020, had spent two decades leading, playing in, touring the world and writing for various Navy bands. Then he thought it might be a good idea to release a big-band album under his own name. Like that other good idea, Charleton's notion proved to be more than good—it was nothing short of inspired. A Fresh Perspective, recorded with proper social distancing during the coronavirus pandemic, swings heartily from the start, enhanced by Charleton's impressive charts and ably performed by an ensemble whose talents are outstanding and everywhere apparent.

The indomitable spirit of the legendary Count Basie band surfaces immediately on "1 West 67th Street," an exhilarating flag-waver ushered in by pianist Bart Kuebler and bassist Ryan Persaud, kicked into high gear by the ensemble and amplified by John Lloyd's nimble trombone solo. That is the first of three Charleton compositions that start the ball rolling. Kuebler's expressive piano brightens the mellow, easy-going "Sunday Morning," leading to ardent solos by Persaud and Kerry Moffit on flugelhorn who shares the spotlight with soprano saxophonist Richard Garcia and drummer Bob Habib on the waltz-like "Fresh Perspective," another of Charleton's superlative charts. A second Charleton, vocalist Emily, makes her first appearance on Rodgers and Hart's delightfully wicked "Everything I've Got (Belongs to You)," her second on a slow-cooked version of Irving Berlin's venerable "Blue Skies."

Moffit's burnished flugelhorn is showcased on Hoagy Carmichael's enduring ballad, "Stardust," his trumpet with Garcia's alto sax on pianist Stefan Karlsson's rhythmic powerhouse, "El Otono." Charleton arranged that number, as he did everything else on the album, including an unusually measured reading of Vincent Youmans' "Tea for Two" (solos by Kuebler and Moffit) and a decidedly upbeat take on the wistful serenade, "When Sunny Gets Blue," on which Lloyd solos again, this time with tenor saxophonist Keith Philbrick. Charleton and Co. ring down the curtain with another of his endearing compositions, "Party on Park," whose zestful rhythms encompass radiant solos by Kuebler, Persaud, baritone saxophonist David Fatek and guitarist Wes Wagner.

Once the framework has been removed and all is said and done, there should only be one irrevocable litmus test for any big band: it has to swing. Charleton's band passes that test with room to spare, thanks in large measure to his superlative charts. And if Charleton should have another good idea like this one, let us hope he safeguards it on a disc and shares it with the rest of us.