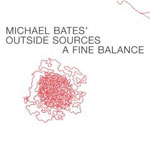 The shadow of Dave Douglas hovers over bassist Michael Bates' debut recording. However, Douglas' influence is understandable, because both are faculty members at the Banff Center of the Arts. Despite the noticeable stylistic overlap, Bates contributes a strong program of originals that stretch beyond academic imitation.

Bates draws influence from a fairly novel place: Douglas' earliest writing from his days as a member of New and Used. The alternating pastoral melodies and angular urban funk of that seminal early 1990s quintet prove ripe for rediscovery. Bates extrapolates and updates an ensemble sound that never fully realized its potential during the early Knitting Factory days.

The compositions are engaging, and Bates' ensemble brings these tunes to life. The session's MVP, saxophonist Quinsin Nachoff, displays a timbre and attack far more adventurous and freewheeling than on his own recent release, Magic Numbers (Songlines, 2006). With looser articulation and a smeary, expressive tone, trumpeter Kevin Turcotte does a fantastic job of sidestepping the Douglas comparisons, marking out his own sound and phrasing. Drummer Mark Timmermans provides adept and sympathetic accompaniment throughout this varied set. Bates is an equitable team player, eschewing the spotlight for a support role.

Trafficking in the same angular linearity and rhythmic tension as many of his peers, Bates places equal emphasis on melodic development. A handful of these tunes sit comfortably in the chamber music tradition, but the majority combine classical austerity with freewheeling jazz improvisation. Pastoral melodies full of long tones and gradually ascending dramatic arcs alternate with acoustically derived urban funk rhythms full of jagged, clipped phrases and vacillating meters.

Pieces like "Coppertone" and "Prodigal" are representative. The former is a stellar example of the ensemble's finely tuned internal dynamics, featuring metric modulation, chameleonic stop-start rhythm structures, and animated group call and response.

The young bassist proves to be an excellent arranger on "Prokofiev." Based on the revered composer's Cello Sonata in C Minor, the piece quickly circumvents chamber music austerity for emotional expressionism. Turcotte's regal trumpet solo clears the way for Nachoff's magnificent, unhinged tenor solo, which is laden with controlled altissimo screaming and impassioned cries.

While Michael Bates has yet to fully shed the influence of his elders, he demonstrates prodigious talent on this excellent, inviting debut.