By WILLIAM CAREY
November 23, 2011
Sign in to view read count 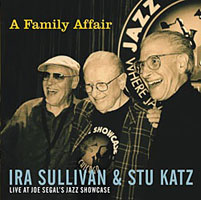 Some numbers to ponder. Saxophonist/trumpeter Ira Sullivan is 80 years old; vibraphonist Stu Katz is 74. 57 years. That is how long Ira Sullivan and Stu Katz have been making music together. 64 years. The number of years that Joe Segal's the Jazz Showcase has been featuring great jazz. In 1954, the year Bill Haley and the Comets recorded "Rock Around the Clock," two fine young jazz musicians first got together in their adopted hometown of Chicago. Fast forward 57 years later and the duo is still going strong, playing with perhaps a bit less fire in their bellies, but making up for it with plenty of love and dedication to the music that they've spent a lifetime making.

Recorded live in Chicago over the course of four nights, A Family Affair is one for the ages, an extremely satisfying recording at one of the country's most venerable institutions. Multi-instrumentalist Sullivan is in fine form, sounding as energetic as a player half his age, but with a subtleness and tastiness in his phrasing that can only come from decades spent on the bandstand. Katz is outstanding as well, on both vibes and piano. The duo has a crew of hometown aces as sidemen, including pianist Dan Trudell, tremendous bassist Dennis Carroll, and drummer George Fludas.

The set list consists of mainly standards, most of the medium- to up-tempo swing variety, but the most interesting moments of the record are the ballads, and the lesser-worn tunes. "Lullaby of the Leaves" is simply scrumptious, as is "Yesterdays," featuring a fine vocal turn by Lucia Newell. The arrangements aren't the tightest and some of the endings are dragged out a bit too long—often a setback of live recordings—but Sullivan and Katz can certainly be forgiven for languishing in each other's company for all these years. Here's to many more.

Blues Two Views; Gee, Matthew; Pennies from Heaven; Scrapple from the Apple; Lullaby of the Leaves; Yesterdays; Take the A Train; Stablemates; What a Friend We Have in Jesus.