By Troy Collins
October 3, 2006
Sign in to view read count 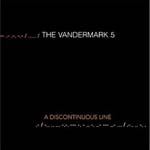 A Discontinuous Line is the first studio recording of the new incarnation of the Vandermark 5, Chicago-based multi-instrumentalist Ken Vandermark's most enduring and versatile ensemble. The Vandermark 5 has been an acoustic quintet since trombonist/guitarist Jeb Bishop dropped the electric instrument from his arsenal in 2001, taking his final leave last year. With the arrival of cellist Fred Lonberg-Holm, the group once again has the capacity to deliver the electronic maelstroms that made them famous outside of the jazz world in the late 1990s.

Lonberg-Holm is equally at home playing gorgeous straight-ahead melodies or experimenting with subtle electronic effects. With an occasional touch of distortion, he summons a sound long gone from the band's palette. Hearing those churning power chords once again backing the group on its more visceral excursions is breathtaking.

Vandermark has been playing more baritone with each passing album; it is beginning to sound like his best horn. Saxophonist Dave Rempis, a taut and visceral improviser, every bit Vandermark's equal, continues to astound. Bassist Kent Kessler and drummer Tim Daisy drive this unit with force. Dynamically restrained during the group's neo-classical excursions, they are equally capable of pulverizing grooves that belong in seedy rock clubs, rather than uptown jazz joints.

Opening with Rempis' spasmodic alto in free flight over Lonberg-Holm's regimented, staccato cello bursts and Daisy's frenetic trap work, "Convertible, Version One" suddenly morphs into a quiet string meditation before Vandermark enters on baritone, building in intensity from plaintive to fervent. Rempis and the rest of the band close in and transpose furious collective improvisation into a monolithic riff, before the piece ends abruptly.

Lonberg-Holm's amplified cello navigates the intense rhythmic workout of "Reciprocal," featuring the fluid bass clarinet work of Vandermark and a stunning alto solo from Rempis. The bouncy post bop of "The Ladder" contains Lonberg-Holm's most outré solo on the record, a feverishly dissonant exploration sandwiched between Vandermark's restrained baritone and Rempis' turbulent alto.

"Some Not All" is the album's epic centerpiece, a tour de force of improvisational wit and communal interplay. Lonberg-Holm proves he can swing acoustically before demonstrating his mastery of the plugged-in power chord. The rhythm section shifts from a fleet free bop section into a grinding funk vamp, with Rempis providing an animated demonstration of circuitous verticality. Daisy pummels his kit mercilessly before Vandermark gradually brings in the whole group to bolster his explosive baritone.