Shu Nakamura: A Day of Dreams

By MARK REDLEFSEN
November 2, 2012
Sign in to view read count 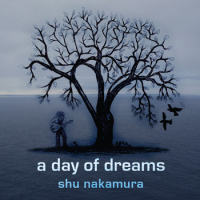 Hailing from Nagoya, Japan, Brooklyn, New York-based Shu Nakamura plays guitars, keyboards and percussion on A Day of Dreams. Shu also displays his ability to compose, arrange and sing. Through learning, working, and teaching a variety of different kinds of music from his youth in Japan, Shu is more of a world musician than one existing in any single genre. A Day of Dreams features an eclectic, aurally expansive mix of music ranging from the celestial ambience of Sigur Rós to the sound patches of Radiohead, dropping back to terra firma, at times, with some heartfelt Japanese folk music, and some blues with a tinge of jazz chords.

The mesmerizing instrumental opener, "East to West," finds Shu playing in front of a curtain his own overdubbed post-rock guitar layers, as he plays a repeating squirreling riff to which he taps his foot. "Train Song," one of two songs sung in English, lays out simple positive lyrics over an acoustic rhythm guitar with a late 1960s feel. "Dunnet Head" bounces with a little more of a Ray Davies storytelling style, with eloquent mandolin picking all along the way. The other two songs that Shu sings in Japanese, "Ima Koko Ni"and "Lion and Mary," are more melodic; accessible enough so that some whistling can also be heard in the background.

The other instrumentals center from Shu's guitar playing. One possible influence or touchstone, because of the overall variety of guitars used, would be Yes guitarist Steve Howe. The title track has a very gentle, European independent film soundtrack quality, with strumming, bells and an accordion-like sound creating a melody perhaps, indeed, worthy of dreams. Bearing no resemblance to the original song of the same name, "Ave Maria" was written by Hikari Ōe, son of Nobel laureate and Japanese author Kenzaburō Ōe. As one of the most peaceful and pastoral songs on the CD, Shu synthesizes Hikari's use of bird chirping and overall brand of original chamber music with his own original stamp. The closing "The Other Side of Memory" vacillates between atmosphere and countering ominous riffs that circle around like dark clouds trying to disturb a nice day of dreams.

Nakamura plays one man's version of world music that is sure to reach a wider universe.