Bob Downes Open Music: A Blast From The Past 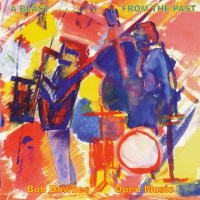 The only (slight) problem with this album is its rather whimsical title which considerably undersells its significance. In his long career, Bob Downes has made some substantial contributions to jazz and improvised music, and this album is an important addition to his discography. Comprised of previously-unreleased archival pieces dating back to the 1970s, Downes can be heard on a variety of instruments including tenor saxophone, as on "Apparition," where—as on two other tracks—he is accompanied by virtuoso bassist and composer Barry Guy and drummer Denis Smith. Benefitting from a keen bass vamp, there is an alternative version of "Brasilian Beauty," to the one found on his album Flashback (Openian, 2009).

Nearer to Open Music (Esoteric, 2010) and Diversions (Vocalion, 2007) than to the rock-infused Deep Down Heavy (Esoteric, 2013) or Electric City (Esoteric, 2010), there are some true gems here. The mesmerising live version of "On The Wing," with the lone Downes soloing on soprano saxophone, is one such example.

But the centrepiece of the album is undoubtedly the twenty-minute "Chain Reaction" with Guy and Smith in attendance. Here Downes explores a veritable panoply of sounds, initially emanating from strident tenor sax and developing in tandem with Guy's resonant pizzicato bass. Downes, in what must be a jazz first, can also be heard gargling with water, then playing slide flute and uttering wordless vocals before an ostinato bass riff restores a less unconventional framework, with Downes now seamlessly migrating to flute. Smith, incidentally, offers some tightly rumbustious drumming here. The final segment of the track sees Guy moving to plaintive arco bass over which Downes plays gracefully, initially on flute then reverting to tenor saxophone, and a reprise of the opening statement. For Downes fans this welcome rarity ranks as unequivocally essential.

Title: A Blast From The Past | Year Released: 2018 | Record Label: Openian