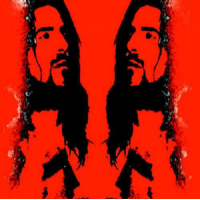 I came across Bumblefoot aka Ron Thal long ago with his guitar frenzy, Zappa-esque release of The Adventures of Bumblefoot. My youngest daughter quickly “borrowed” the disc because of its comical side but I missed hearing it because of Thal’s amazing guitar playing style. Not only does he play unique riffs that rival Vai and Satriani but he physically mutates his axes into bizarre and surreal things. I cannot really describe them except to say think, Dali, Bosch or Pee Wee’s Playhouse.

This release was to be titled Guitars SUCK but with the unforgivably insane madness of the terrorist attack on America by u-know-who on 9-11-01, Thal re-named the release to 9.11, marking the tragic event, and to raise money to help lessen the dire straits of the victims and their families. 100% of the profits from the sale of this release go to the American Red Cross.

If you are into pumping and hard-slamming axe with killer solos laced throughout you’ll love this release. There are seven way-cool instrumentals showcasing Thal’s magic-man fret stunts and a bevy of techniques. And there are five tunes with lyrics and yet again more crunch-worthy explosions of Thal’s fingertips. This is not shred nor aimless noodling jams without soul. Thal bursts out of each track with exuberant guitar pyrotechnics that show form and function in just having fun playing.

Some moments of this CD are light-hearted and others rip out with angst. It’s all here, the heaviness of Prong’s Tommy Victor, some acoustic splendor, and mainly the riff-tech rock mirroring Vai yet this work remains uniquely Thal. Frank Zappa tips his fez to you Bumblefoot. Good stuff. High recommendations for Thal’s noteworthy guitar and his obvious mastery.

Ron Thal on a myriad of axes and more along with his wild friends like Joboj and Dweezil Zappa and others . . .