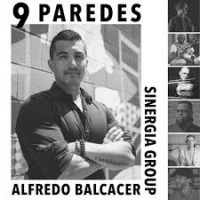 If there's anything that can bind the artistic community in 2020, it's an understanding of isolation's impact. For guitarist Alfredo Balcacer, who was quarantining in his home city of Santo Domingo when COVID-19 closed everybody in, a sense of disorder and frustration, leavened by solace and acceptance, quickly became the norm. But rather than sit by and feel helpless, he filtered those feelings into his music.

"9 Parades" (or "9 Walls") speaks to Balcacer's experiences spending months cooped up in the Dominican Republic, but it also addresses a borderless world allowing for remote revelry. This single, put together through a series of video calls and long-distance recording sessions, binds a brotherhood spread out across the globe—in the aforementioned locale, the Ukraine and the United States, among other spots. It presents a strong brew that sits at the intersection of Latin jazz and Bay Area-style funk while leaning on rhythms endemic to this guitarist's homeland.

From a menacing, accented introduction to the jamming throw-down that follows, Balcacer is bent on mixing emotions as trouble and joy travel down this highway together. Tenor saxophonist Caleb Elzinga and Balcacer each step out to solo—the former proves somewhat soulful, the latter singes—and trumpeter Yakiv Tsvietinskyi offers an edgy outro that runs the song to its overly abrupt end. All the while, keyboardist Rufus Ferguson, electric bassist Henry Rensch, drummer Madison George and percussionist Otoniel Nicolas groove on. A display of friendship and catharsis during times of trouble, "9 Paredes" actually removes walls with its fostering of friendship.