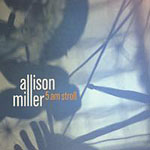 From the first notes of drummer Allison Miller’s début disc, 5 am stroll , you know that the recent passing of Elvin Jones had to hit her hard. She comes from the same place as Jones, with a big sound and style that, at times, is something akin to a barely-contained storm. Still only in her twenties, her admirable technique, in-your-face approach and sheer musicality is impressive, and on this set of mostly original compositions she also shows herself to be a fine composer in the post bop mould.

There’s a refreshing sense of abandon in Miller’s playing. On “1RS” she trades-off with saxophonist Steve Wilson and seems almost ready to leap off the virtual cliff. This is but a subterfuge, however, as there is no doubt Miller is always in complete control as she blends elements of modality with rhythmic feels encompassing Latin, shuffle, New Orleans second line and even a bit of hip-hop. As stylistically broad as she is, everything is subsumed in a distinctly contemporary approach to swing. Like Ralph Peterson, she manages to be assertive without, for the most part, overwhelming the rest of the players. And she is that rarity, a melodic drummer, as evidenced by her musical solo on the title track.

Wilson is a player who often excels more on other peoples’ sessions than his own, and his playing on 5 am Stroll is no exception. Sounding a bit how Coltrane might have had he played alto, his solos, on the fiery title track and the rhythmically-obfuscatory “Wichita Falls,” are the epitome of structure balanced with exuberance. On three tracks tenor saxophonist Virginia Mayhew, with whom Miller plays on a regular basis, joins the proceedings to create a thicker front line with a bold tone and forward-thinking sense of style.

Miller’s drums may occasional overwhelm Bruce Barth’s piano in the mix, but not so much as to take away from his skills as an accompanist; Miller’s hip-hop-inflected take on Monk’s “Evidence” gives him the opportunity to show that while Monk’s quirkiness is a part of who he is, his style owes much to Jarrett and Hancock. Bassist Ray Drummond provides, not surprisingly, a firm support, all the more important because while Miller clearly understands and plays both groove and time, her more rambunctious style requires a firm bassist to keep things anchored.

Miller has only been on the scene a few short years, but in that time she has already begun to make others stand up and take notice. While there is no doubt that this is a drummer’s session, it is not overburdened with drum solos; rather, it is as much about her skills as a composer as it is her abilities as a player. 5 am Stroll is a fine recording of contemporary post bop that should help establish Miller as a leader in her own right.

Visit Allison Miller and Foxhaven Records on the web.