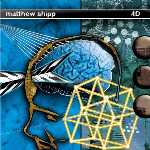 Matthew Shipp has become one of the most distinctive piano stylists operating in the free jazz continuum, recognizable after just a few notes. 4D, his sixth solo piano disc mirrors the format of its illustrious predecessor Harmonic Disorder (Thirsty Ear, 2009) though with pared back instrumentation. Altogether there are 16 cuts reflecting a wide range of approaches during a program just shy of an hour. One consequence of so many short tracks, with 10 clocking in at less than 4 minutes, is that each one represents an intense distillation of the pianist's ideas.

As on Harmonic Disorder, but unlike his last two solo discs, Shipp features standards and popular songs alongside his own compositions, with some recognizable straight away but others treated so obliquely as to be unrecognizable. This allows insight to how he tackles the less well known contours of his own pieces where, unencumbered by bass and drums, Shipp takes such a free approach that it is hard to be sure whether they are extemporized or preconceived.

Although the original material won't cause an outbreak of foot-tapping, that's not the intention. There are different, more bracing pleasures to be savored. "The Crack In The Piano's Egg" is a case in point: as light refracted through a prism separates into its constituent wavelengths, so fragments of angular melody and bursts of lurching headlong rhythm, subjected to Shipp's elastic use of time, stand next to but apart from one another. "Blue Web In Space" sounds like a distant cousin of Shipp favorite "Key Swing" in its rhythmic architecture, though not in the dissonance amid the occasional blue tinged notes and ringing repetitions, while "Sequence And Vibration" often suggests it might resolve into some other Shipp compositions, but never does. At times Shipp's tactics recall other pianists: there is a touch of Sun Ra about the pealing harmonic progression of "Stairs" contrasted with quieter abstract musings, while "Primal Harmonic" has echoes of mid '70s Keith Jarrett in its low key ruminations.

Of the covers, "What Is This Thing Called Love?" is occasionally just glimpsed dashing for cover between dense stands of rhythmic crashing, while "Prelude To A Kiss" masquerades under heavy disguise. "Autumn Leaves" hews closer to the tune before an emphatic chordal mugging and a finale of stabbing Morse code supplements the accustomed cadences. "Frere Jacques" (sounding more like "Lord Of The Dance" to my ears) mutates into clanging prancing variations as if played on underwater bells, while in the closing "Greensleeves" Shipp alternates the (over)familiar theme with passages where the skies darken and thunderclouds drench this particular parade: a powerful meditation on how order descends into chaos to finish this austere but gripping disc.

4D; The Crack In The Piano's Egg; Equilibrium; Teleportation; Dark Matter; Stairs; Jazz Paradox; Blue Web In Space; What Is This Thing Called Love?; Autumn Leaves; Sequence And Vibration; Frere Jacques; Prelude To A Kiss; What A Friend We Have In Jesus; Primal Harmonic; Greensleeves.