By GENO THACKARA
July 21, 2021
Sign in to view read count
Lest there be any doubt that the classic trio remains as malleable as ever, we have an eclectic batch exploring the range of what the format is capable of—familiar and conventional, or very much otherwise.

While Dahveed Behroozi's CV emphasizes his extensive training in both jazz and classical, those are pretty misleading reference points for what he offers on his second release. True, there's an unmistakable refined elegance to it, and any jazz combo would be glad to achieve this trio's near-telepathic interplay. What they spin out, though, is an amorphous experience somewhere between ambient music (though entirely analogue) and free-jazz (though never jarring or awkward).

The trio came into the session with only a few loose sketches (which Thomas Morgan and Billy Mintz hadn't seen in advance) and if anything, made them even looser while floating through. Echos isn't quite a set of songs so much as an ever-shifting lake of sound. The players wade and drift in leisurely step, letting each abstract mood unwind as unhurriedly as it wants to. The waters can get choppy from time to time (the roiling "Gilroy" making a virtual mini-summer-thunderstorm early on), but always with the most perfectly intuitive touch as each moment flows into the next. There's a whole lot of focus and skill behind the playing, and yet it's all used to create an experience as smoothly organic as nature itself.

There's no such stylistic ambiguity where Ray Gallon is concerned (which is not at all a criticism). He's a traditional jazz player down to his bones, the kind that's crossed paths with seemingly everybody in the vast network of players out there. Though it's taken him three decades to feel ready to make his own move as a leader, Make Your Move is packed with a multitude of experiences that he's soaked up while teaching and performing all that time.

What it all boils down to is a bright hour of meat-and-potatoes jazz that's anything but straightforward. Gallon's trio-mates are sharp enough (and their chemistry is close and deep enough) to make convoluted harmonics and odd scattered rhythmic skips seem like child's play. Pieces of music history are scattered all around, from endlessly playful spins on bebop and blues to the occasional piece chordally built from the bones of an old standard. The mastermind knows his stuff thoroughly enough to make long-familiar things feel fresh and tricky things easy on the ears. It's a brisk-swinging affair that's loads of fun on the surface and much deeper than it seems. 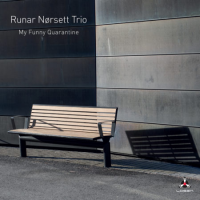 To round things out here, Runar Nørsett and friends basically stay in jazz territory, but pack it with the energy of a catchy-rocking jam band. To take in the wild tumbling of "West Goes East" or the stomping precision of the perversely titled "Stumbling and Fumbling," it's no surprise to hear that Tobias Øymo Solbakk also has experience drumming in metal bands. This affair is full of infectiously punchy sound and catchy hooks to match. A good part of the sound is down to Fredrik Sahlander's warm bouncy electric bass tone as well, and the rest comes from pounding the piano and drums in gleeful defiance of the mostly-analogue setup.

While Nørsett's pieces have a share of that thrash attitude built in, they're infused even more with melody and fun. Among the musical descendants of Esbjorn Svensson, we can list this gang alongside the Maciej Tubis Trio and label-mates LRK Trio as another fresh creative outfit that deserves to be better known—the mix is one accessible to listeners with rock (or perhaps even punk) sensibilities as much as those looking for modern jazz. If the title and cover imply a quiet or lonely affair as a result of 2020's social isolation, please banish the thought. My Funny Quarantine acknowledges the uncertainty of the times, then blasts through the worry with sheer carpe-diem abandon.

Tracks: Kitty Paws; Out of Whack; Craw Daddy; Harm's Way; Back to the Wall; I Don't Stand a Ghost of a Chance; That's the Question; Hanks a Lot; Yesterdays; Plus One; Make Your Move.

Tracks: Super Mario?; Stumbling and Fumbling; Song for a Summer Night; Fooling Around; No Exit!; Where the Songs Have No Name; Dønning; West Goes East; My Funny Quarantine.