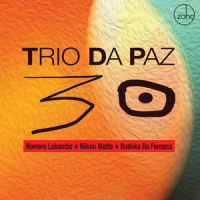 Time really does fly when you're having fun. Just ask Trio da Paz. Guitarist Romero Lubambo, bassist Nilson Matta, and drummer Duduka Da Fonseca are celebrating three decades of togetherness with the aptly-titled 30. It's a collection of music that, like the best of their work, finds them merging the sounds of Brazil with the attitude of The Big Apple, creating Brazilian jazz that finds the perfect balance between the two poles in that genre's name.

Past Trio da Paz triumphs have included Black Orpheus (Kokopelli, 1995), a historically-weighted entry that found these three respectfully redesigning music from the classic soundtrack of the titular film; several with-guest(s) outings, such as Live At JazzBaltica, with vibraphonist Joe Locke (MaxJazz, 2008), and Café (Malandro Records, 2002), with saxophonist Joe Lovano, vocalist Dianne Reeves, and Brazilian icon Cesar Camargo Mariano; and covers-heavy programs, like Somewhere (Blue Toucan, 2005), that touch on canonical Brazilian numbers and jazz standards. For this, Trio da Paz's seventh album, the group dispenses with all of that and focuses on its own. There's no high concept, there are no guests in sight, and there's only a single cover—an up-tempo "Samba Triste" that plays into this band's line of thinking while playing against nominal expectations.

The nine other numbers—four from Lubambo's pen, three from the mind of Matta, and two from Da Fonseca—come in all shapes, styles, and moods. There's the capricious "Alana," Da Fonseca's metrically-morphing ode to his older daughter; the breezy "Outono," a pleasant daydream of a bossa nova; the frisky "Sweeping The Chimney," a piece highlighting Lubambo's nimble guitar playing and Da Fonseca's zippy brush work; "Sampa 67," a number with lively sections of music bookending a rubato Matta solo; and "Aguas Brasileiras," a gentle and graceful oceanic ballad. Strong soloing, feisty groove work, empathetic exchanges, and supportive gestures are all built into the fabric of these pieces. And who would expect anything less from these three? Trio da Paz has been delivering blue-chip Brazilian jazz for decades, and the group shows no signs of slowing down. This is a band that keeps getting better with age.