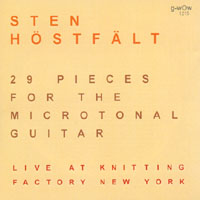 Multi-instrumentalist Joe Maneri's recent release Angles of Repose demonstrated exactly how cogent his microtonal approach to improvisation has been, using extended techniques to expand on the sonic capabilities of more traditional instruments. Clearly inspired by Maneri, Sten Hostfalt takes the more rigid confines of the guitar and transforms it into an instrument equally capable of exploring the minute spaces between traditional notes by using altered tunings, mechanical preparations and electronically enhanced techniques. The result, 29 Pieces for the Microtonal Guitar , is an intriguing recording that shows just how far an instrument can be bent and altered to meet a more experimental and adventurous need.

Clocking in at a brief forty minutes, the twenty-nine (well, there are actually thirty) pieces are extreme miniatures, many as short as thirty seconds, with the longest being a succinct three-and-a-half minutes. While Maneri is the clear primary interest, Hostfalt also pays tribute to Jimmy Giuffre on "Eight Variations" and Paul Bley on "Major Changes"; both artists with whom he has also studied. And while, with a single guitar and minimal electronics, there isn't the same sense of drama, no microtonal work could avoid the influence of Gyorgi Ligeti, whose importance is felt to great effect briefly on "Sarabande."

What is surprising about the recording is how listenable it is. As alien as the harmonies are, as abstruse as the overall concept is, Hostfalt's approach draws the listener into its most extrinsic world. Even rapid-fire and more aggressive pieces like "Micronic" and "Roll" manage to lull the listener with a somehow hypnotic sensibility. The more processed pieces that comprise the five-part suite "Alive on the Dead Screen" may be more jagged and sharp, but they still create an ambience that is strangely appealing. This may not make fans of listeners with a more traditional allegiance to rhythm and harmony, but for those with ears broad enough to allow for the possibility that music can extend beyond the expected, and expand the potent boundaries of experience, 29 Pieces for the Microtonal Guitar constitutes a trip well-worth taking. Hostfalt takes you on a journey to a place where rules, quite simply, don't exist, and anything is possible. William S. Burroughs once wrote "exterminate all rational thought" and, while there is an unquestionable logic behind Hostfalt's work, it is so rooted in the unusual as to have the appearance of complete abandon.