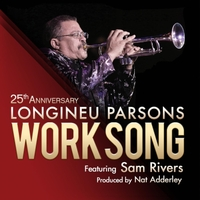 Longineu Parsons blows his trumpet with fearsome intensity on the first four tracks of this album celebrating the 25th anniversary of Nat Adderley's classic soul number "Work Song." Perhaps he blows it with enough intensity to wake the dead: Nat Adderley who died on January 2, 2000, is credited with production, while the great but largely unheralded Sam Rivers, who died on December 26, 2011, blows up a storm on reeds.

The liner notes state: "It might be fun to convince you, the reader, that this album appeared mysteriously from the future to point the way to a benign and beautiful evolution of the soul-jazz idiom. These tracks would confirm that impression and you just might begin to wonder after a while—did this really come from the future?

"But that's not the professional thing to do, so back we go to the truth. As contemporary and current as this album sounds, it is a 25th anniversary reissue. Two categories of musician joined Longineu here: virtuosos and legends, Nat Adderley Sr. and Sam Rivers are in the second category. Longineu's sound and musical concepts set the ambience and range over a strong and expressive ensemble.

"Sam Rivers exchanges solos with Parsons on three tracks and Nat Adderley reprises "One for Daddy-O." Longineu and the band present four other standards and six of Longineu's compositions. Welcome to an album where a hip and soulful past meets a wide-open future!"

Then, in small print: "Previously released by TCB Records in 1994."

The notes quote Nat Adderley as saying: "I have listened to Longineu for more than twenty years and I've seen him survive while continuing to grow professionally with consistency all the time. He never allows his knowledge of his instrument—the trumpet—to interfere with his commitment to creativity and plain old swing... I suggest you listen closely to Longineu—my personal favorite unsung artist."

Make what you will of all this: it makes for a fascinating listen. Longineu growls his way impressively through the title track, ably supported by Rivers. This is followed by "Search for the New Land," "Party in Morocco" and "Song for Dr. Drew," all taken at a merciless pace, before things settle down a little for the soulful "Passing Moment."

There's a very nice version of "My Funny Valentine" before the session winds up with "The Gathering," a rip-roaring Afro-Cuban piece.

A great album, no matter where it came from, past, present or future.