By IAN PATTERSON
January 31, 2020
Sign in to view read count 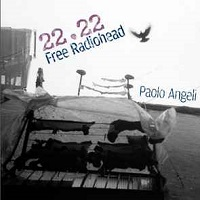 There are almost as many strings to guitarist Paolo Angeli's bow as there are on his customized instrument. Ethnomusicologist, researcher and international arts festival director, Angeli plays in duos with Hamid Drake, Iva Bittova and Fred Frith. It's as a solo performer, however, that the Sardinian guitarist is probably best known. On this hour-long solo suite, Angeli reinterprets the music of English alt-rockers Radiohead, deftly weaving traditional Sardinian folk songs and his own compositions into the mix. It's hard to believe that there are no overdubs, so multi-layered are Angeli's arrangements, but then again, his prepared Sardinian guitar is no ordinary instrument.

Eighteen sympathetic strings arranged in two banks, the upper one running to the head of a cello; foot operated hammers linked to the primary strings; internal motors that activate little propellers that trill the strings; multiple outputs; and an effects box. Suffice it to say, Angeli's guitar is a hybrid beast—a cross between a guitar, a baritone guitar, a cello and a drum kit. The suite, played mostly acoustically, with just occasional, bowed electric interjections, is best appreciated in an uninterrupted sitting.

Angeli purveys an impressive range of textures, styles and emotions. The ragged strings on "Vinagra" evoke a beat-up old guitar from a junk shop. On "Scatterbrain," his delicate picking is neo-classical in tone, while on "Ora Illegale" there's an Andean folkloric vibe . His arco playing is no less varied; cello-like on the intro to "Airbag," Angeli conjures an Eastern violin on "Teflon," and frequently employs the bow to create powerful electric riffs or drone soundscapes.

Rhythmically and percussively, Angeli is just as creative. The brushes effect on "Knives Out" could well be a plastic bag over a foot—a typical live-aid for the guitarist. Flamenco rhythms on the guitar body color the mid-section of "Knives Out." More often than not, guitar melody, bass rhythm and percussive patterns work simultaneously—all without overdubs. Only on "Kumquat" does Angeli resort to loops. The suite is a technically impressive feat, but more importantly, Angeli conveys the emotional shading of Radiohead's strangely mournful, yet frequently uplifting songs.

Southern Mediterranean and Sardinian folkloric strains are never far from the surface. Angeli sings in Sardinian dialect on "Andira" and Notti d'ea," traditional songs from Northern Sardinia dating to the eighteenth century. His distinctive vocals break up the predominantly instrumental suite, and his yearning, melancholy delivery blends perfectly with the emotional language embedded in Radiohead's compositions. The guitarist's own compositions, threaded throughout the suite, are more experimental in design, creating diverse atmospheres that chime well with Radiohead's own eclectic sonic world.

Two years in the making, 22.22 Free Radiohead is a striking labor of love. In his highly personal homage to Radiohead, Angeli captures the spirit of one of popular music's most creative bands, while leaving his own inimitable mark, every step of the way.