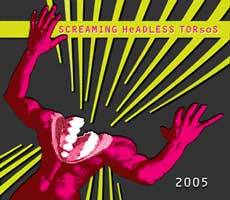 The title of the new Screaming Headless Torsos record marks more than the calendar year to come. It's a conscious sign that nearly a decade has passed since the funk/hardcore group burst out with its self-titled debut, recently reissued as 1995 by Fuzelicious Morsels. During that period there's been a live release and a double-DVD set, as well as a non-screaming version of the Torsos minus vocalist Dean Bowman. But no matter how many years may accrue, these bad boys just refuse to grow up.

He's not the frontman per se, but the prime moving force behind the SHT is guitarist David "Fuze" Fiuczynski, whose thoroughly electric approach to his instrument reflects an open ear to psychedelic and outer sounds, in addition to the funk and metal staples that serve as immediate propulsion for this group. And whatever deep grooves the more-than-capable rhythm section might dig, whatever the message Bowman lays down, Fuze's own playing has always been the most exciting aspect. And, of course, the way the Berklee professor fits it in at odd angles with his group.

Listen to "Woe to the Conquered": the Torsos manages to swivel deftly from headlong ska to thrash metal to pensive balladic reflection and back, and while the contrast may offend purist sensibilities, it's pure brain food for the restless and energy-thirsty. Fuze's solo toward the end is way too brief, and that's an unfortunate reflection of the fact that this record is less improv-oriented than it could have been. I could have used some more stretching out from everyone, really, all around, but this studio effort seems devoted to keeping the song form tight. So it is.

Speaking of songs, these tracks have some direct and uncompromising lyrics about Bush-whack politics ("Oh what a bummer/I'm in my hummer/I'm just so dumb and dumber"), yearning for truth ("...sometimes you can know/Too much for your own bit of good"), and loving in the moment ("You reign when you smile at me"). Like the Torsos' music, their messages are rarely subtle, but to his credit Bowman does have quite a range.

Say what you will about their testosterone-rich approach to music-making, the Screaming Headless Torsos make a statement all their own. Ten years down the road, they're still pushing hard at the barriers between funk, metal, rock, jazz, and psychedelia. Most likely doomed to remain an underground phenomenon, but something tells me fame isn't the point of this adventure.

Visit the Screaming Headless Torsos on the web for sound samples and more.