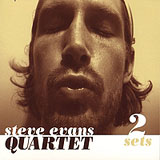 According to the liner notes for 2 Sets, the Steve Evans Quartet attempted a live recording in 2005, but the effort was marred by "technical difficulties ; that could mean anything from a persistently-buzzing amplifier to some guy near the stage who wouldn't stop talking on his cell phone. Rather than try to tape another gig (preferably someplace where cell phones are confiscated at the door), vocalist Evans decided to "re-create the show in a Chicago recording studio.

Evans placed strict rules on the session to keep everyone's mind in "performance mode. When the "Record button was pressed, the Evans Quartet played until the first set was finished—no stopping mid-tune, no re-takes, no going back and listening to individual songs—and then repeated the process after a fifteen-minute break. Evans allowed no overdubbing or pitch-fixing and, in order to "create a built-in intermission as in a live performance, the final product comes on two separate discs. How Evans is going to handle people downloading the music to their iPod is another question.

2 Sets contains music Sinatra would love: Harold Arlen's mournful "Ill Wind and Percy Heath's hilarious "Lost Mind comes right down the middle, with Evans skillfully riding arrangements as standard as the standards themselves. It's the non-jazz composers Evans chooses that sets this collection apart. Three songs from star-crossed singer/songwriter Nick Drake get the royal treatment, the most notable being a quietly pulsing version of "River Man. Drake's takes on life and love go perfectly with the street poetry of Tom Waits, who also gets three tracks. Evans pairs Rodrigo's mediation "Concierto de Aranjuez with Van Morrison's The Way Young Lovers Do, and happily jazzes up Tom Jones' "Soon It's Gonna Rain. And when was the last time you heard a jazz singer tackle Benjamin Britten?

It's a good thing Evans had to move into the studio, because he gets better when he gets nuanced. His light strumming on a cavaquinho (basically a Portuguese ukulele) gives Waits' "Jockey Full of Bourbon a wonderfully mysterious opening, and the spare instrumentation behind "Things Behind the Sun lets Evans give Drake's cautionary lyric the love it deserves. Evans' choice of material is both daring and refreshing, and the chemistry he shares with his three partners is outstanding. Jake Vinsel's bass is a fine foil to Evans' reedy tenor, while drummer Noritaka Tanaka and pianist Leandro Lopez Varady help stretch the canvas so Evans can paint his pictures.

To be blunt, the two-disc package is a conceit: Evans admits the music could fit onto one disc, so without the liner notes detailing the trouble it took to replace concert conditions, the listener would never know the difference. Nonetheless, Evans is an interpretive black belt on the same level as Kurt Elling and Tierney Sutton. If the quality of the original performance was as good as the music on 2 Sets, then someone should find the guy on the cell phone and take away his Bluetooth.