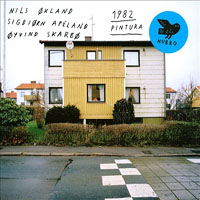 In a world where technology is becoming a bigger partner in everything, for better or worse, there are still some artists who strive for purity—at least within certain contexts. The trio that has come to be known as 1982, when it first came together for its self-titled 2010 NORCD debut, was absolutely resolute in its acoustic purity—so much so that when it performed a showcase set at the top of Mount Ulriken in Bergen, Norway as part of the 2010 JazzNorway in a Nutshell, the success or failure—in this case, an unconditional success—was literally dependent on which way the wind was blowing. With no PA system for assistance, 1982's show could have been a disaster; instead, playing for a group of about forty people, the trio's unique approach to spontaneous creation—combining serious lyricism, potent dramaturgy and the occasional taste of humor—ranged whisper-light to powerfully loud at the drop of a hat, and did it all without the benefit of any amplification.

If 1982's short set represented further honing of the music on its previously recorded debut, then Pintura exhibits further development still, as the trio delivers another eight untitled (and simply numbered) pieces that belie, at least to some extent, the individual backgrounds of its participants. An evocative violinist and one of his country's preeminent proponents of the sympathetic-stringed Hardanger fiddle, Nils Okland is perhaps better known for his forays into the music of Norway's past on Lysøen: Hommage à Ole Bull ( ECM, 2010), a duo recording with fellow 1982er, pianist and harmonium player Sigbjorn Apeland, even while he takes his roots in Norwegian traditionalism into more modern territory on albums like Bris (Rune Grammofon, 2001), again with Apeland, but spread on a larger sonic canvas. Drummer Oyvind Skarbo may be the youngest of the three, but he's already making a name for himself as yet one more creative percussionist—in a country that seems disproportionately stuffed to the gills—in particular on Bergen Open (NORCD, 2011), his more highly charged date with a plugged-in group featuring the electrifying work of another emerging artist, guitarist Thomas Dahl.

If the emphasis remains largely acoustic on Pintura, a wall socket is, at the very least, required now for Apeland, who introduces the swirling Wurlitzer electric piano to "4." The album's second shortest track, supported by Skarbø's minimal backbeat it signals a shift for 1982 as Økland creates a droning backdrop over which Apeland incorporates Middle Eastern tonalities and more in an unexpectedly virtuosic but never superfluous performance.

The trio continues to prove its mettle at rubato tone poems so quiet that it's almost knee-jerk to start leaning forward into the music, even with headphones. Pintura demonstrates even greater out-of-the-ether compositional focus on the hymnal "2," where Apeland's reed organ-like harmonium meshes almost seamlessly with Økland. That's not to say 1982 doesn't head for more outré territory, or that its players' ears haven't become even more finely attuned, as the lengthy "3" finds Apeland's trills moving with Økland in marvellous simpatico, while Skarbø's textural brushwork interacts with equal accord. Hints of ambient and minimalism imbue "5," while Apeland's near-relentless density on "6" and the entire trio's more reckless abandon on "7" give Pintura both narrative shape and broader stylistic diversity than its first disc.

For those who believe that free improvisation is nothing more than aimless meandering, self-centered expressionism and the worst of art for art's sake, groups like 1982 and albums like Pintura suggest otherwise. It may be necessary to dispense with certain preconceptions in order to let the music in, but deep listeners like Økland, Apeland and Skarbø make it easy, in a brief, 35-minute set that moves from profound beauty to more challenging terrain, all within an overall arc that makes every moment meaningful, and even the more unapproachable segments completely relevant in the context of a greater whole.