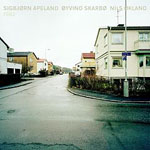 On a per capita basis, creativity and innovation coming out of Norway is thoroughly disproportionate to a population straining to reach five million. With a particularly strong reputation for its intrepid exploration of modern technology and instrumental orthodoxy, there's also plenty going on without the benefit of laptops, turntables and effects processors. When harmonium player Sigbjørn Apeland, drummer Øyvind Skarbø and violinist Nils Økland—billed as 1982 Trio—performed at the top of Mount Ulriken as part of JazzNorway in a Nutshell 2010, there wasn't an amplifier to be found. Had the wind been blowing away from the audience rather than towards it, much of the subtler aspects of the trio's improvised set would have been lost. There's no risk in losing anything on the group's debut, 1982, demonstrating that the complexion of improvisation is absolutely dependent upon the environment from which it stems.

Rather than recording outdoors, surrounded by expansive vistas, Økland, Apeland and Skarbø recorded in Bergen's Grieghallen (Grieg Hall), a large concert hall as accustomed to large symphony orchestras as it is intimate chamber ensembles. 1982 Trio is all about in-the-moment creation, but its musical references are far more closely aligned with contemporary classicism and—no surprise, given Økland's reputation as an adventurous interpreter on albums like Monograph (ECM, 2009)—Norwegian traditionalism,. Mirroring its performance at the top of Mount Ulriken, 1982 Trio winds its way through a broad musical terrain, from spare, cinematic atmospheres—where Økland seems to breathe on his Hardanger fiddle rather than bow it—to denser audioscapes, with Apeland's droning, dissonant, near-microtonal chords ebbing and flowing with near-microtonality, as Skarbø thunders at times, elsewhere adding more delicate colors.

What is missing from this vinyl-only release is some of the humor that Skarbø injected partway through 1982 Trio's live performance, lending 1982 greater gravitas. Still, as serious—and, at times, deeply challenging—as 1982 is, there are long stretches of melancholic beauty, in particular the final of the five untitled improvised pieces, taking up all of side two. Contrasting the shorter, more angular pieces on side one, this 17-minute piece begins, paradoxically approaching silence, with Økland—playing either Hardanger fiddle or viola d'amore, both instruments possessing a number of resonating sympathetic strings—building gentle melodies over Apeland's evocative changes. Whether Apeland's slowly ascending chords are in response to Økland's desolate melodies or vice versa, the trio spurs the imagination with vivid imagery—all stark landscapes and flowing water.

And with Apeland's reedy harmonium meshing somehow with Økland's instruments to sound almost as one, Skarbø is left to provide contrasting textures, suggesting pulse on occasion, but just as often responding to the very same images Økland and Apeland imply. 1982 isn't all about beauty, but when it is, it's proof that, in its most fundamental form, it can be a bittersweet experience, where loss and regret coexist with optimism and joy. A thoroughly compelling debut from a singularly unique combination of acoustic instruments.